This article from Patrick Healy is stirring up some conversation today.

White men narrowly backed Hillary Clinton in her 2008 race for president, but they are resisting her candidacy this time around in major battleground states, rattling some Democrats about her general-election strategy.

While Mrs. Clinton swept the five major primaries on Tuesday, she lost white men in all of them, and by double-digit margins in Missouri, North Carolina and Ohio, exit polls showed — a sharp turnabout from 2008, when she won double-digit victories among white male voters in all three states…

Her standing among white men does not threaten her clinching the Democratic nomination this year, or preclude her from winning in November, unless it craters. Mr. Obama lost the white vote to Mrs. Clinton, after all, but still won the presidency.

But what is striking is the change in attitudes about Mrs. Clinton among those voters, and her struggle to win them over again.

Paul Waldman doesn’t mince words with his response in an article titled: Hillary Clinton Doesn’t Need White Men. While any politician is loath to simply dismiss an entire demographic, he has a point.

Let’s be more specific. Clinton will have the support of tens of millions of white men. But she doesn’t need to do any better among them than any Democrat has, and even if she does worse, she’ll probably be completely fine.

That’s because whites are declining as a proportion of the electorate as the country grows more diverse with each passing year. In 1992, just 24 years ago, whites made up 87 percent of the voters, according to exit polls. By 2012 the figure had declined to 72 percent. Since women vote at slightly higher rates than men, white men made up around 35 percent of the voters.

Those numbers will be lower this year, which means that even if nothing changes in how non-whites vote, Republicans will need to keep increasing their margins among whites to even stay where they are overall — in other words, to keep losing by the same amount.

So in effect, Waldman is saying – not that Clinton doesn’t need white men – but that she doesn’t need them in any more significant numbers than Democrats have in the past, perhaps even less.

I am reminded of an article by Andrew Gellman and Avi Feller where they looked at the results of the 2012 presidential contest between Barack Obama and Mitt Romney. Their conclusion was:

The red-blue electoral map that we’re used to poring over is mainly the result of a political and geographic divide among American voters at the older, richer and whiter end of the socioeconomic spectrum.

When it comes to gender and race, here is how that looks in graph form: 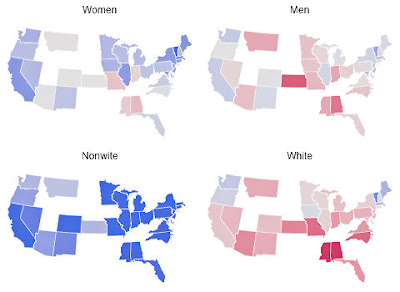 What we see is that Obama won or stayed close to Romney with men in traditionally Democratic states and even prevailed with white voters in some of them. The divide is much more pronounced in typical Red states.

That is why Joel Benenson, a Clinton strategist and pollster, got it just about right with this:

“Winning is never about slicing and dicing the electorate,” he said. “What you have to do is create a diverse coalition of voters that enables you to win, and win repeatedly. That’s what Hillary Clinton has done…”