* I started the day by talking about the mess Republicans have created for themselves in North Carolina. Things only got worse for them as the day progressed.

The letter (copied on the next page) says the new law will make it harder for the businesses to recruit and retain talented employees. “It will also diminish the state’s draw as a destination for tourism, new businesses, and economic activity,” the letter reads.

* We can add one more to the list of “outrageous things Donald Trump said.”

NEW Trump to @msnbc: “there has to be some form of punishment” for women who have abortions but he has yet to determine what that should be.

That led to my favorite tweet of the day.

We’re going to need new units of measurement for this gender gap. https://t.co/PPmhROnN6O

If Congress were to pass legislation making abortion illegal and the federal courts upheld this legislation, or any state were permitted to ban abortion under state and federal law, the doctor or any other person performing this illegal act upon a woman would be held legally responsible, not the woman. The woman is a victim in this case as is the life in her womb. My position has not changed — like Ronald Reagan, I am pro-life with exceptions.

But as Amanda Marcotte explains, that’s not much of an improvement.

So instead of believing that women who get abortions are violent criminals, he has shifted to the apparently more acceptable belief that they are drooling idiots who cannot be trusted with something as simple as a medical decision regarding their own body. Why this is better continues to be a mystery.

* Just in case you think that the House Freedom Caucus hasn’t done enough damage to Congress, they’re busy cooking up a new one.

The House Freedom Caucus has already changed the direction of Congress this year, derailing — at least temporarily — a House GOP budget that conservatives argue spends too much. Now they have a new target in sight: the lame-duck session.

When the House returns from a two-week recess on April 12, a small group of members are gearing up to stop GOP leadership in both chambers, if they have their way, from holding a legislative session after the November election…

Conservative members say they are trying to stop Congress from doing anything after the November election because Congress does some of its most slapdash lawmaking once the public has voted. The group of lawmakers, anchored by the House Freedom Caucus, doesn’t want to take any chances that the Senate confirms a Supreme Court nominee or that Congress rams through the expansive Trans-Pacific Partnership trade deal or a big budget agreement that raises spending.

* Today the Justice Department’s Civil Rights Division announced that they had reached a settlement agreement with the city of Newark and their police department.

The Justice Department announced today it has reached a comprehensive settlement with the city of Newark, New Jersey, that will bring wide-ranging reforms and changes to the Newark Police Department (NPD). The agreement, which is subject to court approval, resolves the department’s findings that NPD has engaged in a pattern or practice of unconstitutional stops, searches, arrests, use of excessive force and theft by officers in violation of the First, Fourth and 14th Amendments. The proposed consent decree also resolves the department’s findings that NPD’s law enforcement practices had a disparate impact on minorities in Newark…

“This agreement holds the potential to make Newark a national model for constitutional, effective and accountable community policing in the 21st century,” said Principal Deputy Assistant Attorney General Vanita Gupta, head of the Justice Department’s Civil Rights Division. “The Department of Justice looks forward to working closely with the city as we implement this agreement and begin to change policies, improve systems and rebuild trust between Newark police officers and the residents they serve.”

* Finally, given the level of nonsense we’re hearing from politicians and candidates these days (see: Donald Trump above), I thought this quote from President Obama might come in handy every now and then. 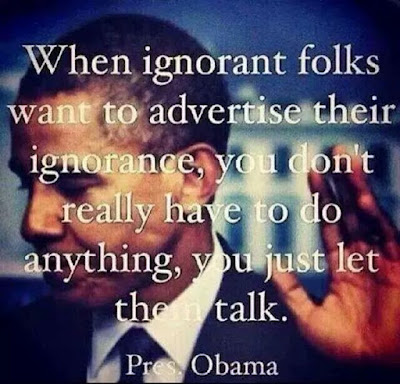