* While we’ve all been focused on the election, the current inhabitants of the White House have been busy. Jared Bernstein covers two of these moves with: Conflict of interest and inversions: two very big deals that must…MUST…not go unnoticed.

OK, it’s official: my mind is blown by two new, smart, common sense, progressive initiatives that the Obama administration – with great input from Treasury and the Labor Dept. – has managed to implement this week. Each deserves, and will get, individual attention and explanation from me. But for now, let us marvel at what’s happened here, especially as you may be distracted by the political horse race.

The new conflict of interest rule

This new rule, as I’ve written before, requires financial advisors providing advice on retirement accounts (and 401(k)’s that will ultimately get rolled over into such accounts) to put their clients’ interests ahead of their own…

Meanwhile, the Treasury Dept. surprised the heck out of me by making another run at blocking inversions, taking by far their most serious steps to date. So serious, in fact, that a few short days after Treasury’s announcement, Pfizer decided not to go forward with their long-planned inversion with now Irish (formerly New Jersey) company, Allergen.

The Department of Housing and Urban Development is making it easier for people with criminal records to find housing.

In new guidance, released Monday, HUD tells landlords and home sellers that turning down tenants or buyers based on their criminal records may violate the Fair Housing Act.

People with criminal records aren’t a protected class under the Fair Housing Act, and the guidance from HUD’s general counsel says that in some cases, turning down an individual tenant because of his or her record can be legally justified.

But blanket policies of refusing to rent to anybody with a criminal record are de facto discrimination, the department says — because of the systemic disparities of the American criminal justice system.

Bernstein ended his article with a reminder that applies to all three of these actions.

Because Congressional conservatives would never have let either of these new rules become law, they’ve been run through executive action. That means the next president could reverse them.

In others words, as if the stakes in the next election weren’t already high enough, they just got a lot higher.

* Shady Hamid writes: Everyone says the Libya intervention was a failure. They’re wrong.

Libya and the 2011 NATO intervention there have become synonymous with failure, disaster, and the Middle East being a “shit show” (to use President Obama’s colorful descriptor). It has perhaps never been more important to question this prevailing wisdom, because how we interpret Libya affects how we interpret Syria and, importantly, how we assess Obama’s foreign policy legacy.

Of course, Libya, as anyone can see, is a mess, and Americans are reasonably asking if the intervention was a mistake. But just because it’s reasonable doesn’t make it right.

While people can disagree with some of particulars of the case he made (and I certainly do), it is always good to hear a challenge to conventional wisdom.

* Finally, we’re starting to cycle through the “lasts” in annual events with the Obamas in the White House. Here is one worth noting.

Michelle Obama helped to turn the dirt and plant seedlings on the South Lawn of the White House for the last time as first lady on Tuesday. She planted, among other crops, the same kind of lettuce grown on the International Space Station.

Over the two terms of the Obama administration, online videos of the first lady asking “Turnip for what?” or surprising schoolkids in their own garden classrooms have become familiar sights. So much so that it’s easy to forget that the kitchen garden, established by her in 2009, was the first to be planted on the White House grounds since Eleanor Roosevelt’s World War II-era Victory Garden. 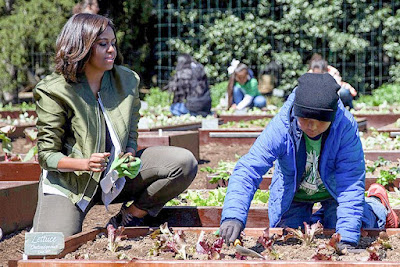