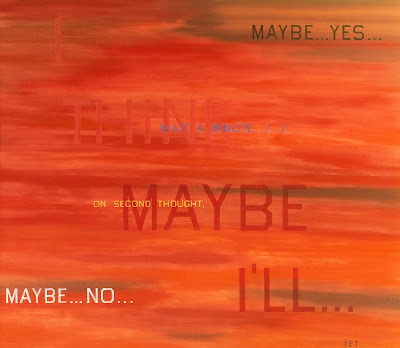 When the Obamas moved in to the White House, they made some changes to the artwork that decorated their new home. The painting above by Ed Ruscha titled “I Think I’ll…” was one they chose. At the time, a friend of mine told me that he thought it said something important about our new president. James Kloppenberg, who wrote the book Reading Obama, would probably agree.

It has become a cliche to characterize Obama as a pragmatist, by which most commentators mean only that he has a talent for compromise – or an unprincipled politician’s weakness for the path of least resistance. But there is a decisive difference between such vulgar pragmatism, which is merely an instinctive hankering for what is possible in the short term, and philosophical pragmatism, which challenges the claims of absolutists…and instead embraces uncertainty, provisionality, and the continuous testing of hypotheses through experimentation.

After almost two years as president, Obama has failed to satisfy the left for the same reason that he has antagonized the right. He does not share their self-righteous certainty.

Having grown up in a family and community where questioning was discouraged in favor of dogma handed down by those in positions of authority, I learned that an embrace of difficult questions and uncertainty was the only path available to me if I wanted to sort through what I truly believed. It was a terrifying journey to learn to think for myself and admit that I didn’t always have the answers. In the end, it left me extremely wary of anyone who presented themselves as an ideologue enveloped in certainty. We tend to think that people like that inhabit the right wing of the political spectrum. But it is not their domain exclusively. In addressing liberal bloggers at Daily Kos, the President himself once wrote:

…to the degree that we brook no dissent within the Democratic Party, and demand fealty to the one, “true” progressive vision for the country, we risk the very thoughtfulness and openness to new ideas that are required to move this country forward. When we lash out at those who share our fundamental values because they have not met the criteria of every single item on our progressive “checklist,” then we are essentially preventing them from thinking in new ways about problems. We are tying them up in a straightjacket and forcing them into a conversation only with the converted.

I think about all that these days as I watch the political discussions taking place during this presidential primary. Of course, a competition like the one between Hillary Clinton and Bernie Sanders tends to crowd out questions and uncertainty. As a result, no one is really listening and any discussion that happens merely leads to defensiveness and digging in to established positions.

I’ve come to believe that listening requires a suspension of certainty – at least long enough to hear what the other person is saying and attempt to empathize with where they are coming from. It also requires some curiosity about perspectives different from our own. It is in that spirit that I ask the question: Are things like uncertainty, listening, curiosity and empathy liberal values?