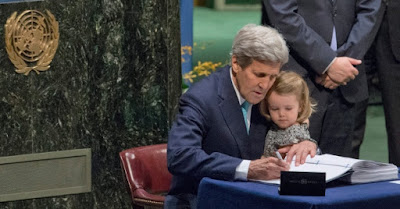 While most of the talk today is about campaigns and candidates, it is worth noting that something important happened on this 46th Earth Day.

Amid hope and hype, delegates have finished signing the Paris climate agreement at UN headquarters in New York.

Some 171 countries inked the deal today, a record number for a new international treaty.

But dozens of other countries were required to take this second step before the pact came into force.

UN Secretary-General Ban Ki-moon said: “Paris will shape the lives of all future generations a profound way – it is their future that is at stake.”

Speaking at the opening ceremony, he said the planet was experiencing record temperatures: “We are in a race against time I urge all countries to join the agreement at the national level.”

“Today we are signing a new covenant for the future.”

In the photo above, Secretary of State John Kerry is signing the Paris Agreement on behalf of the United States, accompanied by his two year-old granddaughter Isabelle. I am reminded that it was towards this day that Kerry prioritized his work at the State Department from the beginning.

But while the public’s attention has been on his diplomacy in the Middle East, behind the scenes at the State Department Mr. Kerry has initiated a systematic, top-down push to create an agencywide focus on global warming.

Shortly after Mr. Kerry was sworn in last February, he issued a directive that all meetings between senior American diplomats and top foreign officials include a discussion of climate change. He put top climate policy specialists on his State Department personal staff. And he is pursuing smaller climate deals in forums like the Group of 20, the countries that make up the world’s largest economies.

I’m sure that all of that was done with Isabelle’s future in mind.