There are big important things happening with Republicans today. For example, a former House Speaker was sentenced to jail time, a presidential candidate gave an incoherent speech about foreign policy and another one is about to announce a VP pick who is even less popular than he is. But seriously, doing anything more than simply note those things in passing is a sure-fire way to spread depression and cynicism.

Instead, I thought you might like to know that last month an 8 year old girl in Flint, Michigan wrote President Obama a letter.

Hello my name is Mari Copeny and I’m 8 years old, I live in Flint, Michigan and I’m more commonly known around town as “Little Miss Flint”. I am one of the children that is effected by this water, and I’ve been doing my best to march in protest and to speak out for all the kids that live here in Flint. This Thursday I will be riding a bus to Washington, D.C. to watch the congressional hearings of our Governor Rick Snyder. I know this is probably an odd request but I would love for a chance to meet you or your wife. My mom said chances are you will be too busy with more important things, but there is a lot of people coming on these buses and even just a meeting from you or your wife would really lift people’s spirits. Thank you for all that do for our country. I look forward to being able to come to Washington and to be able to see Gov. Snyder in person and to be able to be in the city where you live.

She got a response. 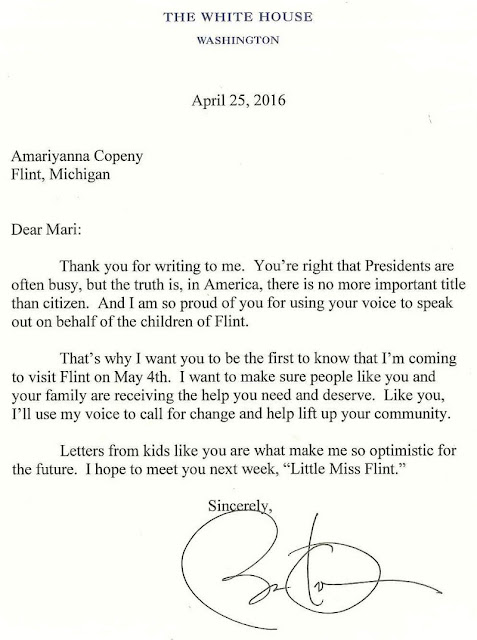 According to the White House, the President will “hear first-hand from Flint residents like Mari about the public health crisis, receive an in-person briefing on the federal efforts in place to help respond to the needs of the people of Flint, and speak directly with members of the Flint community.” Obviously, he’ll also be spending some time with a community organizer known as Little Miss Flint. 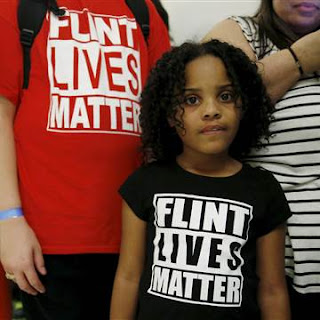