Every presidential election narratives are developed that attempt to highlight significant groups of voters and explain their political choices. For example, do you remember “soccer moms” in 1996? With the candidacies of both Donald Trump and Bernie Sanders this year, we are hearing a lot about “angry” and “working class” voters – with those two often paired.

While these narratives can be helpful in categorizing the behavior of different groups that make up over 200 million voters spread out across different regions of the country, they can become mythologies that lead us to make sweeping generalizations and miss important facts. So let’s take a look at some of the facts that are missed when we talk about angry working class voters.

First of all, Nate Silver says that the idea that Donald Trump’s support in the primaries is fueled by working class voters is a myth.

The median household income of a Trump voter so far in the primaries is about $72,000, based on estimates derived from exit polls and Census Bureau data. That’s lower than the $91,000 median for Kasich voters. But it’s well above the national median household income of about $56,000. It’s also higher than the median income for Hillary Clinton and Bernie Sanders supporters, which is around $61,000 for both.

Much of this “new” working class, including a substantial minority of its whites, leans Democratic; they backed Barack Obama in 2008 and 2012, and many support Hillary Clinton in this year’s Democratic primary. They aren’t alienated by movements for immigrant rights and police reform; they’re sympathetic. They’re not just the beneficiaries of the liberal push for greater inclusion; they’re often the people driving it. These Americans, women in particular, are an integral part of the new liberal majority.

Tally the numbers and you’ll find that Trump’s appeal falls well outside the large plurality (if not majority) of working-class Americans who are either people of color (young or otherwise), or liberal to moderate whites.

When we talk about angry voters, it is important to keep in mind that the issue driving that anger is income inequality. You will often hear candidates talk about the need to create more jobs. But according to Pew Research, that is not the concern it was a few years ago.

Americans are now more positive about the job opportunities available to them than they have been since the economic meltdown, when views of the job market took a nosedive. Today’s more upbeat views rank among some of the best assessments of the job market in Pew Research Center surveys dating back 15 years. 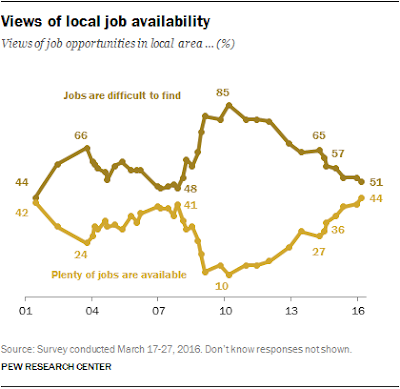 It will come as no surprise that people with higher incomes and more education have less concern about the availability of jobs. But the shocker is that it is young people (18- 29) who are the most optimistic. Even more than that, white people are significantly more optimistic about the job market than African Americans.

One of the things that is clear when you look at data like this is that it is becoming increasingly important to include an analysis along race, gender and age lines in order to paint an accurate picture of the electorate. In the Democratic presidential primary, those demographics have been driving the outcome. We’re about to see how that plays out in the general election.