flagged an important finding from the most recent national PPP poll.

In both cases Democrats and independents are correct in their understanding of how things have changed since Obama became President, but Republicans claim by a 64/27 spread that unemployment has increased and by a 57/27 spread that the stock market has gone down.

It is always helpful to see these things in graph form. Benen gives us one on the question about the unemployment rate. 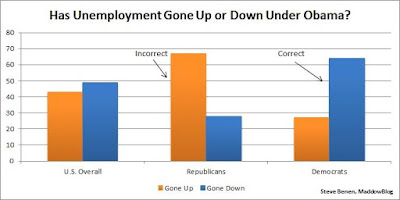 Just prior to reading Benen’s article, I had seen something similar from Ariel Edwards-Levy. What was even more interesting in her polling of Republicans was that not only did approximately 60% of them say that the economy had declined since 2008, that number jumped to 80% when the question was posed in terms of how the economy had performed since Obama was first elected.

Apparently it’s necessary to state the obvious: since Obama was elected, the unemployment rate has gone down, the stock market has gone up and the economy has improved. Liberals tend to argue over whether or not those things have improved enough – which is a subjective question. But too many Republicans either don’t know or are unwilling to embrace objective facts. As Benen says, “If those engaged in the public debate have no shared reality, then there’s no common foundation to build upon, and even less to talk about.”

It’s hard to imagine how we tackle the problem of increasing political polarization when a significant portion of the population rejects basic facts as a starting point. Much of this is attributable to the fear-mongering of right wing media and epistemic closure. That is why President Obama has been experimenting with alternative media markets over the last couple of years – like participating in interviews with Marc Marron, Bryan Cranston, Marilynne Robinson, David Simon, Misty Copeland and Bill Simmons. He is doing everything he can to sneak up on people as a regular human being rather than the political caricature the right wing has made him out to be. Sure…that’s an uphill struggle. But if he can find a crack – that’s how the light gets in.