Yesterday, the press had a field day with these remarks by President Obama at the Rutgers University commencement because they seemed to be aimed at Donald Trump.

Obviously they hit their mark. Last night the Donald tweeted this:

“In politics, and in life, ignorance is not a virtue.” This is a primary reason that President Obama is the worst president in U.S. history!

I specifically looked at his twitter feed to see if Trump went on to explain himself. He didn’t. That’s all he had to say.

So, what is the message here? Notice that he said that a rejection of ignorance is the primary reason Obama is the worst president in U.S. history. I’m not going to try to get into Trump’s head on this one. We simply need to note that the presumptive Republican presidential nominee suggested that ignorance IS – in fact – a virtue.

This is one of those moments when E.J. Dionne’s admonition to “preserve the shock” comes into play. And no, I’m not shocked that Donald Trump would tweet something like that. I am shocked that anyone would take him seriously as a potential POTUS when he says things like that. I refuse to normalize ignorance as a virtue.

What is a viable response to something like that? I am truly at a loss for words. But President Obama gave us the answer recently. 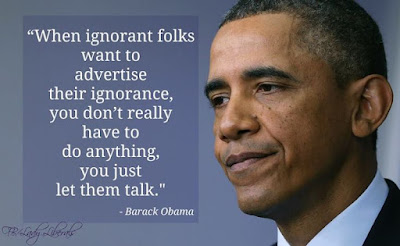