In his op-ed titled Here’s What We Want, Bernie Sanders wrote this:

What do we want? We want an economy that is not based on uncontrollable greed, monopolistic practices and illegal behavior.

Throughout the primary, Sanders has talked about the need to eliminate greed — especially the kind exhibited by Wall Street. That is a sentiment that is embraced by all liberals — especially in an era when the presumptive Republican presidential nominee espouses exactly the opposite. 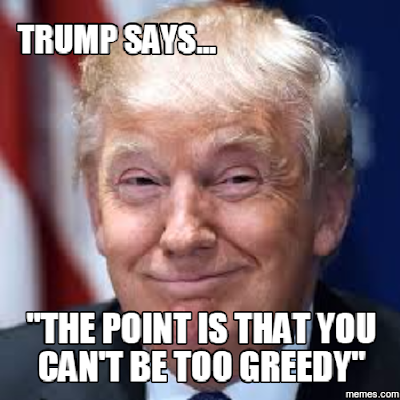 But the question becomes: what is the role of politics (or government) when it comes to eliminating greed? It is the same question we would ask Christian conservatives who want to eliminate what they consider to be sexual immorality. And frankly, it is similar to questions about how we eliminate things like racism, sexism and homophobia. These are questions about the overlap of politics and morality with which we all must grapple.

At one point during the primary, Hillary Clinton was challenged by members of the Black Lives Matter movement. She said something that goes to the heart of this question.

It is really important that we get this one right. Just as we don’t want a government that tells us who we can/can’t have sex with, we need to realize that we can’t have a government that calibrates how greedy one is allowed to be. I don’t think that is what Sanders was suggesting. He went on to say this:

We want an economy that protects the human needs and dignity of all people — children, the elderly, the sick, working people and the poor. We want an economic and political system that works for all of us, not one in which almost all new wealth and power rests with a handful of billionaire families.

That echoes what Clinton said about racism. What we want from government is a focus on lifting up those who are affected by things like greed and racism — in other words, to level the playing field.

Personally, I believe that greed — like racism and sexism — are learned. Short of informational campaigns that attempt to educate the public, we can’t legislate a change of hearts. What we CAN to is create laws that legislate against the abuses that stem from greed — like fraud and the monopolization of our economy — just as we created laws to combat segregation and discrimination. Otherwise, it is up to movements like Moral Mondays to organize people around their shared values.