Analysis of what happened to party identification in the 1980’s gave us the reality of “Reagan Democrats” – white working class voters who shifted from being Democrats to Republicans. I suspect that is why so much political commentary has focused on this particular group – including during this current election season.

But the folks at Bloomberg Politics bring us some interesting news that has received far less notice.

For decades, white voters with at least a bachelor’s degree have favored the Republican nominee over the Democrat in U.S. presidential elections, although not by as much as working-class whites.

The 2016 presidential election is turning that dynamic on its head. Polling shows that while presumptive Republican nominee Donald Trump is the clear choice among white voters without a college education, whites who’ve completed college prefer Clinton. It’s a trend analysts say is especially apparent among women, and may become more pronounced between now and November…

Recent national polls of registered voters show Clinton, 68, leading with college-educated whites, a group that President Barack Obama lost by 14 percentage points nationally in 2012 and by 4 points in 2008. The size of her advantage in late June varied from just 1 point in a Wall Street Journal/NBC News survey, to an 8-point edge in a Washington Post/ABC News poll, to 10 points in a Quinnipiac University survey.

In other words, we’re seeing white flight from the Republican Party. Of course, I should probably add that ANY flight from the GOP would be white, because that’s the demographic they have appealed to since the 1960’s.

The folks at Bloomberg credit this flight of white college-educated voters to the candidacy of Donald Trump. But as a lot of us have been pointing out, his rise can only be understood by examining what Republicans have been up to since the Bush/Cheney era (or perhaps before that). So it might be helpful to take a more historical look at what brought us to this place. For example, here’s how Pew Research has graphed the changes in party identification since the 1960’s. 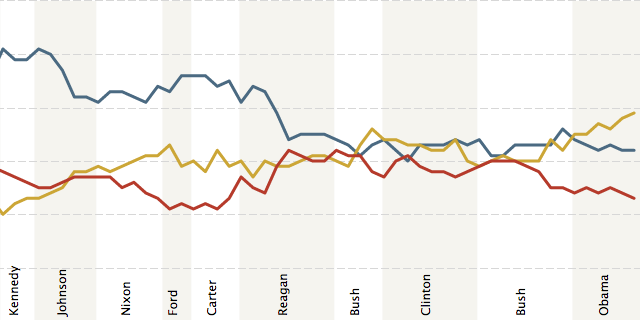 Walking through that, we see a big drop in the number who identify as Democrats (blue line) during the Johnson years – which can be attributed to Civil Rights laws and the launch of the Southern Strategy. Initially, that produced an increase in the number of Independents (yellow line). It wasn’t until the Carter years that we see an increase in Republican Party identification (red line) going into the Reagan years with another steep drop of Democrats and increase of Republicans. That change captures what we’ve called Reagan Democrats.

From the end of the Reagan years through the first part of the Bush/Cheney era, all of that stabilized with a few bumps here and there that are likely related to the recession in the early 90’s, the public’s disgust with the Lewinsky hearings and the terrorist attacks on 9/11. That stability continued through to 2014 (when this graph ends) for the Democrats. But from the final years of the Bush administration through Obama’s presidency, we see a decline in the number of those who identify as Republicans and an increase in Independents. In other words, for roughly the last 10 years, we’ve been witnessing a white flight from the Republican Party.

If the dynamic the Bloomberg reporters identify is related to this analysis, it indicates that Republicans have been losing college-educated whites for about a decade now. Note that the majority of that change is due to white college-educated women – a group whose numbers continue to grow as more women seek higher education. But it is also interesting to keep in mind the Republican’s “war on women” that included the incendiary rhetoric a few years ago about what constitutes “legitimate rape.” That has been coupled with their refusal to embrace things like equal pay and reproductive choice (including access to contraception).

But I suspect that the Republicans’ “war on science” and embrace of conspiracy theories have done a lot of discredit them with college-educated whites – along with the more blatant forms of racism. From climate denialism to Jade Helm to anti-immigrant rhetoric, it becomes increasingly difficult for thinking adults to sign on to a party that embraces that kind of extremism – even if you are fiscally conservative.

This is what David Frum was talking about when he described efforts (including those of Speaker Paul Ryan) to create an “extremist minority program” and then try to sell is to a majority coalition. It doesn’t work.

What we don’t know is how all of those new Independents will vote this fall. I’m sure that some will vote for Trump, some will stay home, some will vote for a third-party candidate and some – as Bloomberg notes from the polls – will vote for Clinton. What we do know is that, rather than reversing this trend, Donald Trump exacerbates it. And so it will be interesting to see if the white flight from the Republican Party continues.