In 1999, U.K. Prime Minister Tony Blair pledged to eliminate child poverty. This was a lofty goal, but not an empty promise. Over the next decade the U.K. reduced child poverty by more than half, improving the lives of millions. In sharp contrast, the U.S. child poverty rate grew over this same time period, reaching a 20-year high in 2011. While there is a lot of criticism and confusion around Britain’s recent decisions with Brexit and implications for the country’s future, there is a lot that America has to learn from Britain when it comes to addressing child poverty. 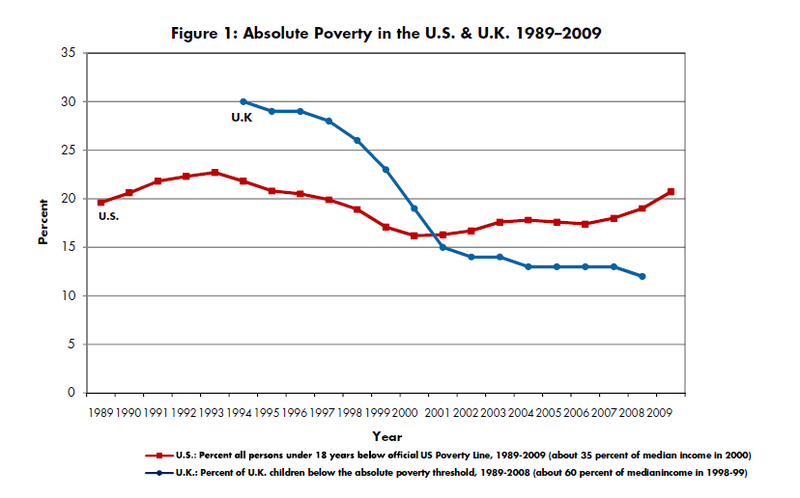 The number of children in the U.S. living in poverty is devastating. According to 2014 Census Bureau data, almost 16 million children in the United States – 22 percent of all children – lived in families with incomes below the federal poverty level. That’s $24,008 per year for a family of four.  As I mentioned in a recent post on the findings from 2016 KIDS COUNT Data Book, this disadvantage has lifelong consequences for the education, income, health, and well-being of children.

What’s more is that recent data from First Focus’ Children’s Budget 2016 shows that federal spending dedicated to children has dropped and now represents just 7.83 percent of the federal budget in fiscal year 2016. Total spending on children’s programs has decreased by five percent in the last two years. (In comparison, the share of domestic spending focused on children was 20.1 percent in 1960 and 15.4 percent in 2006.) Given the research that shows investing in children is our nation’s greatest investment opportunity, and the fact that child poverty costs the U.S. economy an estimated $672 billion each year, the spending cuts seem especially backwards.

Earlier this month at the 2016 Children’s Budget Summit: Place, Race, and Economy in Washington, DC, journalist Charles Blow addressed these issues in his keynote remarks on America’s racial generation gap and how it’s affecting investment in America’s children. Blow discussed that we need to rise above the impulse of punishing parents and focus on children’s well-being. He spoke of the need to raise child welfare benefits and to invest directly in children. Blow also provided the audience with the example of the U.K. as having been largely successful in its efforts to reduce child poverty and said the U.K. has “handed the United States a roadmap to follow.”

How did the U.K. significantly reduce child poverty? The British government’s strategy to tackle poverty took on a three-pronged approach:

While there are lessons from each prong of the U.K. poverty plan, the first prong (increasing levels of financial support for children and families) has been a central plank in the strategy to tackle child poverty and would be an important place for the U.S. to start.

Beginning in 1999, the U.K. substantially raised the value of their universal child benefit, with the largest increases for families with young children. Further, the government introduced a new Child Tax Credit for low and middle-income parents, which reached all low- and middle-income families. Together, these efforts raised family incomes substantially for those at the bottom of the income distribution and reduced material hardship.

The United States is one of the few western industrialized countries that does not have some kind of universal support for children. And, the United States currently offers no cash assistance for families with children and no earnings. The Earned Income Tax Credit and Child Tax Credit both only go to households that earned money working, which puts people with low skills and little education at a significant disadvantage. (It is important to note that the U.K. also no longer has a universal benefit — Starting in 2013, the current Conservative government started means-testing the child benefit for middle-class and upper-income households.)

Further, the current federal Child Tax Credit has many limitations. First, it provides a relatively low level of benefits — up to $1,000 for each dependent child under age 17. Second, the credit is provided just once a year, at tax time, making it hard for families to use it to support their children all year round. Also, the U.S. credit is provided only to families that meet a threshold for earnings, phasing in as earnings increase and then phasing out as earnings rise higher and is not fully refundable, preventing it from reaching the lowest-income children. Its minimum earnings requirement also excludes many families who experience job loss or who do not earn enough to meet the threshold.

In contrast, the U.K. credit is not dependent on parents working and is fully refundable so that those with little or no income can still take advantage of the credit. Additionally, payments are made on a progressive basis, so that poorer families receive more money.

The U.S. should follow the U.K.’s lead and eliminate the minimum earnings requirement and make the credit fully refundable so that all qualifying families are able to access the full credit.

The U.S. now only spends 1.2 percent of GDP on family benefits. This is less than half of what other advanced economies spend on average. Meanwhile other countries are doing far more to help families and the results speak for themselves: in a 2012 UNICEF report on the well-being of children in 35 developed nations, the U.S. ranked 34th in relative child poverty.

Increasing the level of financial support for children and families in the U.S. has many benefits. First, the cost to American families of raising children has risen dramatically in recent years. Second, research shows both short- and long-term benefits of strengthening the Child Tax Credit and providing additional income to families with children, in areas such as academic achievement, health, and adult employment. Additional family income would also have a positive impact on children of color, reducing some of the persistent racial and ethnic disparities. According to a recent Talk Poverty article, a $2,500 universal allowance for children under six would lift 3.2 million children out of poverty, reduce the child poverty rate to 14.5 percent, and reduce the deep child poverty rate to 3.7 percent. The cost of such an expansion would be approximately $17.7 billion. Given the societal costs related to childhood poverty, this is a price worth paying.

In March of this year, House Democrats introduced the Young Child Tax Credit Act, a bill that would enhance the Child Tax Credit with a supplement credit for each child under age 3. While the passage of this bill would not have the impact that the above-mentioned $2,500 universal allowance would, it is a step in the right direction. This credit would be in the amount of $125 per month, for a total of $1,500 per year, and would phase out at a rate of five percent, starting at the existing Child Tax Credit income threshold of $75,000 for a single-earner household and $110,000 for a dual-earner household. The bill would also give more parents an economic boost during a child’s critical development years and remove arcane earning thresholds that keep the current credit from reaching many impoverished families.  According to House Democratic Leader Nancy Pelosi, “The Young Child Tax Credit will put more money in the pockets of young families and help parents provide a strong foundation for their children at a time they need it most. When working families succeed, our country succeeds…”

The Republicans have their own plan to address poverty. Last month, Speaker Paul Ryan released A Better Way: Our Vision for a Confident America, an agenda to address poverty in America. While the plan brings attention to the issues facing families in poverty, Republicans call for mandatory work requirements and for more cuts to programs that support families, such as SNAP (more commonly known as food stamps). This would have devastating consequences for the 22 percent of American children living in poverty. For example, strict “work-first” requirements make it difficult for parents receiving benefits to engage in activities that will truly help them achieve self-sufficiency, such as pursuing higher education or engaging in skills or vocational training. Also, this plan ignores the research that shows that work requirements have generally been unsuccessful in increasing long-term employment, as well as the research that shows the powerful long-term benefits of childhood access to social assistance programs.

As sociologist Jane Waldfogel at Columbia University has stated, “America’s high child-poverty rate is an outcome of our social policy choices.” The moral and economic consequences of having one quarter of our nation’s children living in poverty can no longer be overlooked. The United Kingdom has shown that cutting child poverty is both doable and a choice. Strengthening the Child Tax Credit, introducing a universal child allowance, and passing the Young Child Tax Credit Act could be powerful tools for improving the lives of many families.