* I have to admit, I’m still feeling a little sick to my stomach after hearing this today:

The Trump campaign was quick to issue a statement. 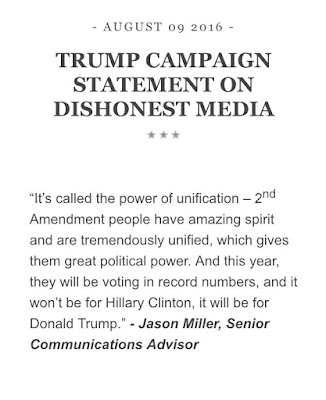 But if you listen to the context – Trump is talking about Clinton appointing judges, which would happen AFTER the election. So that explanation doesn’t work. Whether or not he is suggesting that his opponent be assassinated or the judges she would appoint is immaterial.

This country has long prided itself on the peaceful transition of power based on voting by the people in elections. These words from Donald Trump were spoken at a time when the ground is already being primed for a confederate insurgency. It is extremely dangerous rhetoric and anyone who doesn’t condemn it in the strongest possible terms is complicit.

* I’ve said several times that I won’t bother with trying to follow Donald Trump’s flip-flopping on policy. This video is a bit long – but pretty much covers what drove me to that conclusion.

* Yesterday I suggested that someone should keep track of all the Republicans who are defecting from the Trump campaign. Today, TPM started doing exactly that.

Donald Trump hasn’t exactly made it easy for his fellow Republicans to wholeheartedly support him. A flood of prominent GOPers, from current elected officeholders to former national security and foreign policy officials, have either withdrawn support for the GOP nominee or voiced strident opposition to his comments in recent weeks.

It can be tough to keep track, so we’ve compiled a handy guide to keep it all straight.

* Yet more more good news on the success of Obamacare:

A few recent studies suggest that people have become less likely to have medical debt or to postpone care because of cost. They are also more likely to have a regular doctor and to be getting preventive health services like vaccines and cancer screenings. A new study, published Monday in JAMA Internal Medicine, offers another way of looking at the issue. Low-income people in Arkansas and Kentucky, which expanded Medicaid insurance to everyone below a certain income threshold, appear to be healthier than their peers in Texas, which did not expand…

The researchers gathered their results by conducting a large telephone survey of low-income residents of the three states. They asked the same questions three times: in 2013, before the law’s Medicaid expansion; at the end of 2014, after it had been in place for a year; and at the end of last year. Then they compared what happened over time, using Texas as a kind of control group to see how much of a difference the Medicaid expansions in the other two states made.

Their survey found people in Arkansas and Kentucky were nearly 5 percent more likely than their peers in Texas to say they were in excellent health in 2015. And that difference was bigger than it had been the year before.

* Given all the focus on the presidential race, this story is not likely to get the notice it deserves.

The Justice Department has concluded its civil rights probe into the Baltimore Police Department and officials are expected to release a highly critical report of the agency on Wednesday, according to two people familiar with the matter.

The lengthy report details what federal investigators concluded after a so-called “pattern or practice” review that lasted more than a year and examined the Baltimore department’s use of force, searches, arrests and other policing methods. The probe found discriminatory policing practices, and local and federal officials will now have to negotiate a court-enforceable order to ensure future reforms, one of the people said.

* Finally, I don’t know about you – but after all that Trump ugliness, I feel a need for some soul-cleansing. Here’s a tune from Amos Lee that I often turn to for that.