We are not enemies, but friends. We must not be enemies. Though passion may have strained it must not break our bonds of affection. The mystic chords of memory, stretching from every battlefield and patriot grave to every living heart and hearthstone all over this broad land, will yet swell the chorus of the Union, when again touched, as surely they will be, by the better angels of our nature.

* By way of contrast, I’m just going to leave this one here with an, “Oh my!”

* This is an interesting story that I’ve been following since the start of this election season.

In just the first quarter, more than 252,000 U.S. residents applied to become naturalized citizens, a 28 percent increase from the same period a year earlier, according to the U.S. Department of Homeland Security. Besides the 41 percent increase in Florida, gains were registered in swing states: about 6,000 applications in Pennsylvania, 3,000 in Nevada, 4,000 in North Carolina and 3,000 in Colorado. There are 8.8 million permanent residents living in the U.S. eligible for citizenship, of whom 2.7 million are from Mexico, according to government estimates.

* Julian Assange (founder of Wikileaks) has always struck me as an odd character. That’s why this doesn’t surprise me.

When the radical government transparency organization Wikileaks on Tuesday offered a $20,000 bounty for information about the murder of a Democratic National Committee staffer, it marked the group’s latest salvo against Hillary Clinton in its newly assumed role as her chief antagonist.

In recent months, Wikileaks’ Twitter feed has been awash in posts maligning the former secretary of state and promoting polls that purportedly show Donald Trump sliding to an easy victory over Clinton. But with the organization’s $20,000 reward, Wikileaks waded further into the internet’s vast, anti-Clinton fever swamps, which have pushed the bonkers conspiracy theory that DNC staffer Seth Rich was killed for crossing the Clintons…

Assange’s crusade against Hillary Clinton – which ultimately is in support of Donald Trump – reminds me that when he formed the Wikileaks Party in Australia, he claimed it was an error that they listed an online preference for white nationalist parties in that country. Just sayin…

* Today both Hillary Clinton and Russ Feingold got some great news.

Hillary Clinton’s lead over Donald Trump has tripled in Wisconsin since July, with the Democratic nominee now holding a double-digit advantage, according to a Marquette University Law School poll of likely voters released Wednesday.

Those numbers sent Wisconsin from “toss-up” to “leans Clinton” on the RCP electoral map.

* Finally, here is a little political humor for hump-day. 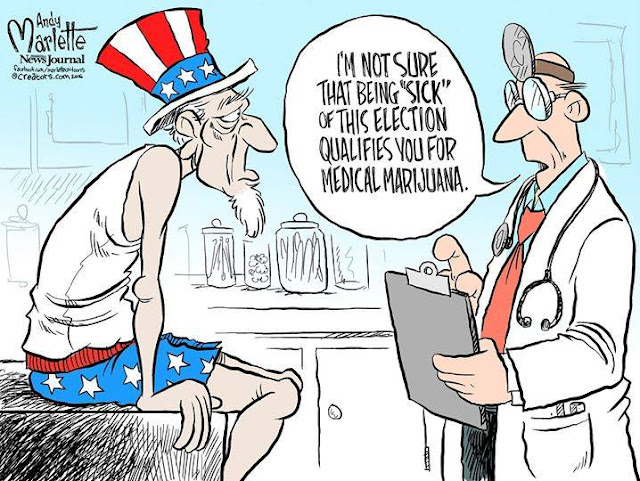