Last week Donald Trump’s fear-mongering about Muslims got personal. He went after my home state.

“The state is having tremendous problems,” he said.

Here is a pretty typical reaction:

Some community leaders said Trump was using the cases to generalize about a community some estimate at more than 70,000. Jaylani Hussein, the executive director of the Council on American-Islamic Relations in Minnesota, said local Somali-Americans actively worked to stop an earlier wave of departures to join the terror group Al-Shabab, which claimed an estimated two dozen people from the state.

“Donald Trump’s message has always been about using isolated incidents and terrorist attacks across the world to push his politics of fear,” Hussein said. “This community is thriving, and his remarks are really unfair.”

Over the years President Obama has come up with a line he uses whenever people at his rallies boo at things like Trump’s remarks. He always says, “Don’t boo…vote!” That is exactly what the Somali community in Minnesota did this week.

Neighborhood activist Ilhan Omar made history Tuesday by winning a fiercely competitive DFL primary in a Minneapolis House district, which means she likely will become the nation’s first Somali-American legislator next year…

Born in Somalia, Omar, 33, and her family escaped civil war and lived for four years in a Kenyan refugee camp before ultimately moving to the Somali-American neighborhood of Cedar-Riverside, where she has lived for nearly two decades and is currently director of policy initiatives at Women Organizing Women…

“Tonight we made history,” Omar told the crowd. “Tonight marks the beginning of the future of our district, a new era of representation. Tonight is about the power of you.”…

Omar’s dramatic victory threatened to overshadow another upset, this one from 24-year-old Fue Lee, who was born in a refugee camp in Thailand and currently works in the office of Secretary of State Steve Simon. He defeated 10-term incumbent Rep. Joe Mullery, DFL-Minneapolis.

Both upsets came in heavily DFL districts, which means they are virtually assured of victory in November.

The future Omar talked about – which was represented by both her victory and that of Fue Lee – is exactly what Donald Trump and his supporters are afraid of. It is the one David Simon wrote about after Barack Obama’s re-election.

But the country is changing. And this may be the last election in which anyone but a fool tries to play — on a national level, at least — the cards of racial exclusion, of immigrant fear, of the patronization of women and hegemony over their bodies, of self-righteous discrimination against homosexuals. Some in the Republican party and among the teabagged fringe will continue to play such losing hands for some time to come; this shit worked well in its day and distracted many from addressing any of our essential national issues. But again, if they play that weak-ass game past this point, they are fools…

Hard times are still to come for all of us. Rear guard actions will be fought at every political crossroad. But make no mistake: Change is a motherfucker when you run from it. And right now, the conservative movement in America is fleeing from dramatic change that is certain and immutable.

There is no escape from the change that is underway – not even by watching the Olympics, as Omid Safi pointed out in this Facebook post.

This, this is the America that’s on her way, just around the corner. Black, Hispanic, white, Jewish…confident not in spite of her diversity, but because of it. 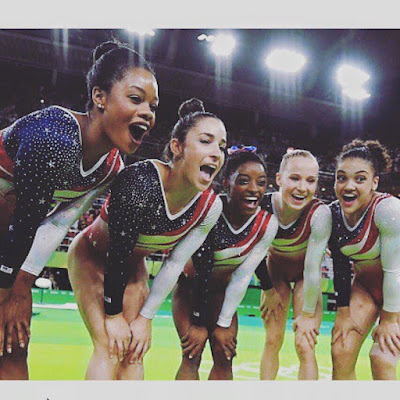 For those of us that celebrate this inevitable change, we would be wise to heed Obama’s words: “Don’t boo…vote!”