* Just in case you were wondering, Donald Trump is still the sexist guy we’ve come to know over the last few years. He apparently doesn’t think Hillary Clinton “looks presidential.”

* This is an interesting tidbit that explains why I have found that it is such a waste of time to track down Trump’s actual policy positions.

* That led Chris Hayes to engage in a bit of a tweet storm ending with this:

But ultimately a Trump Presidency is a complete and total black box. No one, probably not even Trump knows what the hell it looks like. 8/8

* There was big news today at Fox. First of all:

Contrary to initial reports that Ailes would pay a portion of the sum personally, 21st Century Fox now confirms that it is funding the settlement.

* That was followed almost immediately by this:

Senior political analyst Brit Hume will take over for Van Susteren’s 7 p.m. show “On the Record” starting immediately, and running through the election. It isn’t clear what will happen to the timeslot after the election.

* In many ways, President Obama’s trip to Laos is attempting to accomplish the same thing he did in other countries, like Argentina.

President Barack Obama on Tuesday recognized America’s secret war in Laos and the remnants that linger here decades later, a symbolic gesture intended to move relations between the two countries beyond their dark past.

Obama, the first sitting U.S. leader to visit the small Southeast Asian nation, stopped short of apologizing for the conflict, but said he came to the country in the “spirit of reconciliation.”

“Today I stand with you in acknowledging the suffering and sacrifices on all sides of that conflict,” Obama said in a speech at the Lao National Cultural Hall. “Given our history here, I believe that the United States has a moral obligation to help Laos heal.”

Obama, during what he said would be his last trip as president to Asia, announced the U.S. will give Laos $90 million over three years to help clean up unexploded bombs it dropped on the country during the Vietnam War.

* Finally, I am sure that Phyllis Schafly has loved ones that will grieve her passing. But perhaps the most positive thing I can say about her is that it looks like one time she may have been absolutely prophetic. 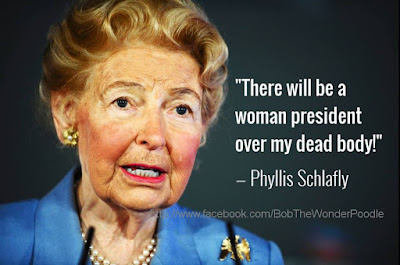 Update: Oops, according to Snopes, Phyllis Schlafly didn’t actually say that. So I guess the most positive thing I can say about her is nothing.