Richard Cohen suggests that he has uncovered the question that will determine the outcome of this presidential election.

Frank Luntz, the Republican political consultant, is a master of the political epigram. Under his tutelage, the estate tax became the death tax and global warming became climate change. So Luntz, once again going to the heart of the matter, recently put an either-or question to a group of about 50 people: What would you rather see, Donald Trump’s taxes or Hillary Clinton’s emails? Upon that question hinges the election.

Ignoring the fact that Clinton has released/turned over all of her emails while we still haven’t seen Trump’s tax returns, I couldn’t disagree more. And frankly, I sure hope he’s wrong.

While the press fumes about presidential candidate’s health, foundations, tax returns and emails, the really important question on the table is whether we want to build on the progress that has been made over the last eight years or are living in the midst of “midnight in America” and need to drastically change course. There is data that can help us analyze that question beyond our own personal experience. Today the U.S. Census Bureau released some information about what happened on some key economic measures in 2015 that should certainly be factored in. Here are the top line numbers:

* The share of Americans who lack health insurance fell 1.3 percentage points, to 9.1 percent

On that first bullet point, here is a chart showing the trend line. 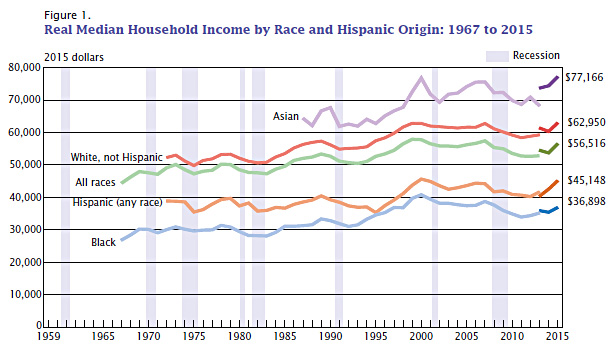 The gains brought median incomes nearly back to their levels before the recession, after adjusting for inflation, though they remain below 1999 levels.

The gains outpaced even the most optimistic expectations from many economists.

We can certainly engage in a discussion about whether this progress is happening fast enough, who is getting left behind and what else we need to do. But those are entirely different questions that the ones that are being put on the table by the Republicans.

Perhaps it’s time to bring back Ronald Reagan’s line: “Are we better off than we were 8 years ago?”