The work of feminism has been to give women choices. Most often the battle lines have been drawn when it comes to professional and reproductive choices. But the elements of our patriarchal system that limit those choices have been built on something more foundational: what Freud called the “Madonna/Whore Complex.”  At it’s root, it is an attempt to control women’s sexuality. Women are seen as either sexually pure or sexually manipulated by men. Nowhere does it allow for a woman to be sexually empowered. Heidi Priebe gives us a great example of what that looks like these days:

The Madonna-Whore complex is thriving every time a guy tells you that you seem like a “Nice girl” and then is shocked to hear about your sexual history because the idea of you being a nice human being and a sexual human being are incompatible in his mind. It’s the assumption that the traits we value as stereotypically “feminine” are directly at odds with embracing one’s sexuality.

I say all that because Donald Trump’s late-night tweeting about Alicia Machado was the perfect example of a man who views women through the Madonna/Whore Complex.

Wow, Crooked Hillary was duped and used by my worst Miss U. Hillary floated her as an "angel" without checking her past, which is terrible!

Did Crooked Hillary help disgusting (check out sex tape and past) Alicia M become a U.S. citizen so she could use her in the debate?

What we see there is that Machado must either be an “angel” or “disgusting” – and it all hinges on her sexual behavior. What Trump assumes is that if she was “disgusting” sexually, then he is justified in fat-shaming her and calling her Ms. Housekeeping. So women either conform to the “nice girl” image of the Madonna or men are free to insult and degrade them. This is the way that men have been attempting to control women via their sexuality for centuries.

Trump has also demonstrated that he casts Hillary Clinton in the Madonna/Whore Complex where women’s sexuality is always and only in service to men. On the one hand, he retweeted a supporter who said, “If Hillary Clinton can’t satisfy her husband what makes her think she can satisfy America?” On the other, this weekend he suggested that Hillary hasn’t been “loyal” to her husband.” In other words, Bill’s sexual improprieties were Hillary’s fault because she wasn’t whorish enough to satisfy her husband, but she is to be condemned if she wasn’t the Madonna who stayed loyal to him.

If you’d like an antidote to the Madonna/Whore images that surround us, I can recommend one from an unlikely place: the late 1980’s TV series “China Beach.” The overriding theme is the Vietnam War and the main subtext is the women who worked as nurses. But an underlying storyline is about Colleen McMurphy (nurse, good girl, Madonna) played by Dana Delany and K.C. Koloski (prostitute, entrepreneur, Whore) played by Marg Helgenberger. 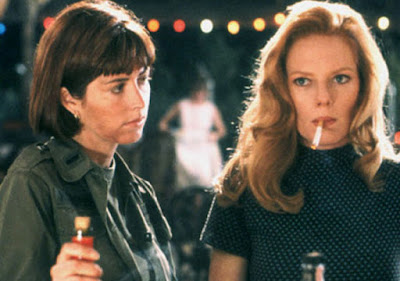 Throughout the series we learn that McMurphy has her vices and Koloski her virtues. In other words, both women are humanized sexual beings. As that truth becomes clear, these two women do what women have been doing for centuries to cope with the effects of patriarchy…they become friends. In other words, they learn what it means to be “stronger together.”