Is it desperation? The themes and instincts of the anti-Semitic radicals and extremists his campaign stews in? A “global conspiracy” of the political elites, international finance and the media who have “robbed our working class, stripped our country of its wealth and put the money in the pockets of a handful of large corporations and political entities.”

Whatever Trump is thinking or means, the white nationalists and neo-Nazis he’s activated will hear his speech with glee because he’s channeling text book anti-Semitic conspiracy theories, with all the code words and emotional tenor. I genuinely don’t know how much of this he even understands or cares about. But his rage and anger is in tune with these movements. And he’ll cast about for the most coherent and resonant storyline that captures it. It doesn’t matter what he thinks. It matters what he does.

* Here’s my quick take on all that:

For years now I’ve been saying that white patriarchy is like a beast lashing out in its death throes. That description fits Trump perfectly.

* The Committee to Protect Journalists has issued a statement saying that Trump is a threat to press freedom.

Since the beginning of his candidacy, Trump has insulted and vilified the press and has made his opposition to the media a centerpiece of his campaign. Trump has routinely labeled the press as “dishonest” and “scum” and singled out individual news organizations and journalists.

He has mocked a disabled New York Times journalist and called an ABC News reporter a “sleaze” in a press conference. He expelled Univision anchor Jorge Ramos from a campaign press conference because he asked an “impertinent” question, and has publicly demeaned other journalists.

Trump has refused to condemn attacks on journalists by his supporters. His campaign has also systematically denied press credentials to outlets that have covered him critically, including The Washington Post, BuzzFeed, Politico, The Huffington Post, The Daily Beast, Univision, and The Des Moines Register.

Throughout his campaign, Trump has routinely made vague proposals to limit basic elements of press and internet freedom. At a rally in February, Trump declared that if elected president he would “open up our libel laws so when they write purposely negative and horrible and false articles, we can sue them and win lots of money.” In September, Trump tweeted, “My lawyers want to sue the failing @nytimes so badly for irresponsible intent. I said no (for now), but they are watching. Really disgusting.”

* Have you noticed that Trump’s BFF Chris Christie has been MIA lately? Perhaps this has something to do with that:

A judge has found probable cause for a complaint of official misconduct against Gov. Chris Christie related to the George Washington Bridge lane closures.

Judge Roy McGeady issued the ruling Thursday. The case now goes to the Bergen County Prosecutor’s Office, which will decide whether to bring the issue to a grand jury for possible indictment.

* A few days ago Mark Cuban tweeted this:

Every single @realDonaldTrump hotel and golf course is toast. Done. Over. Bernie Madoff now has a better brand.

Michelle Celarier writes that if Trump’s new DC hotel is any indication, Cuban is right.

The 263-room five-star hotel in the historic Old Post Office building opened last month. But even with a prime location near the White House, swanky interiors, and aggressive promotion by the candidate himself, empty rooms have forced the hotel to reduce rates during a peak season. At the same time, the hotel has lost two planned restaurants, Hispanic employees are making claims of discrimination, and protesters are gearing up to do whatever they can to cause trouble for the hotel.

* According to Clinton campaign manager Robby Mook, 2016 voter turnout may be the biggest in history. Here is some of the data he shared:

2. The number of Hispanics in N.C. requesting absentee ballots is up 33%, number of Asians seeking them is up 45%

* Finally, today Bob Dylan was awarded the 2016 Nobel Prize in literature. President Obama told a great story about him performing at the White House.

Here’s what I love about Dylan: He was exactly as you’d expect he would be… He came in and played ‘The Times They Are A-Changin’.’ A beautiful rendition. The guy is so steeped in this stuff that he can just come up with some new arrangement, and the song sounds completely different. Finishes the song, steps off the stage—I’m sitting right in the front row—comes up, shakes my hand, sort of tips his head, gives me just a little grin, and then leaves. And that was it—then he left. That was our only interaction with him. And I thought: That’s how you want Bob Dylan, right? You don’t want him to be all cheesin’ and grinnin’ with you. You want him to be a little skeptical about the whole enterprise. So that was a real treat. 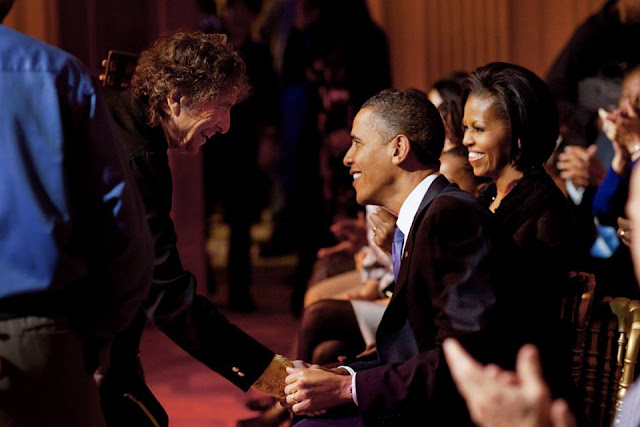