I’ve been struggling to figure out how to write about the latest revelations about Donald Trump. I have tremendous empathy for the women that he sexually assaulted and the millions of other women for whom this conversation is triggering their own experience. I don’t think the stories that are surfacing are insignificant, but the reason we’re hearing about them is that we’re in the middle of an election and the perpetrator is on the ballot.

That candidate’s minions are busy tying themselves in knots to suggest why we shouldn’t believe the women who have recently come forward, but should accept everything Bill Clinton’s accusers had to say. And seriously…who thought it was a good idea to go after the Big Dawg’s sexual indiscretions in pursuit of a candidate who was obviously a sexual predator? In some ways, I can’t believe that this is what we’re talking about as we prepare to elect this country’s first female president. On the other hand, I suppose it isn’t that surprising that the prospect of breaking that huge glass ceiling would be accompanied by a lashing out of the dying beast of patriarchy.

In the end, I suppose my reluctance to dive into this story is because I find none of these revelations surprising and I don’t think that they will change the outcome of this election. Those who could stomach Trump bragging about sexual assault aren’t suddenly going to change their minds now that women have come forward to talk about how he did it to them.

No one wants to absolutely call this presidential election because we still have 3 1/2 weeks to go – anything can happen. So the folks at FiveThirtyEight give Trump a 13% chance of turning things around and at Upshot they say it’s 11%. But notice that absolutely no one is crafting the scenario by which Trump climbs out of this mess he’s made. As long as his rage is dialed up to 11, he’ll keep lashing out in ways that are guaranteed to sink the ship even faster. What we are witnessing was captured pretty well by this comparison of TIME magazine covers from August 2016 and now: 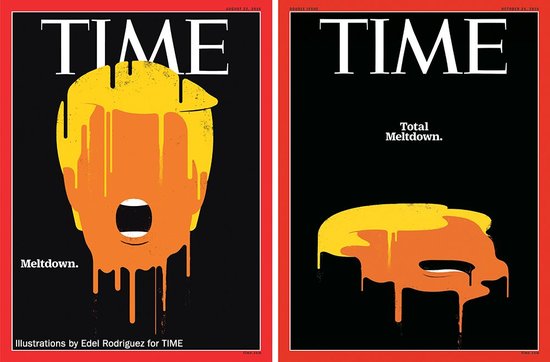 I’m not going to call this one either (not that anyone would care if I did). But I will endorse this from Matthew Dowd:

For this general election: the fat lady has been introduced, she is on stage, standing at microphone, and about ready to sing.

I’ll only add that the prospect of celebrating the defeat of Donald Trump with a fat lady singing is perhaps as good as it gets.