I grew up mostly in East Texas in the district that is currently represented by Louie Golmert. I also have a fascination with understanding what drives people to support Donald Trump. We’ve been fed a lot of information about that and I’m not always sure that it gets to the root of the problem. So you can imagine that I was interested in reading a column by Joe Lansdale (who lives in Nacogdoches, about 70 miles south of where I grew up) in the Texas Observer titled: “Why My East Texas Neighbors Are Voting for Trump.”

Lansdale begins by saying that these folks are not “stupid rednecks” – as many non-Trump supporters believe. He says that many of them make good money and are well educated.

Thing is, the support of Trump in Texas — and I speak specifically of my region, East Texas — goes beyond the smart and the not so smart, the educated and the uneducated. It is more a result of what I like to call the happily stupid; the ones who hold stupid views by choice, not due to lack of intelligence, but due to a kind of tribalism. Facts that interfere with their version of the world are there to be ignored. It’s like putting a hat on a pig and insisting the porker is your Uncle Frank, contrary to all other evidence.

Trump has provided a dark, dank hole into which these folks can dump whatever it is they’re mad about. Even contradictory views, since Trump frequently changes viewpoint in midsentence, can happily nest there, swelling and breeding like poison fungus.

When it comes to what these people are mad about, here’s is how Lansdale describes it:

Republicans since the ’60s have run elections on hatred of the outsider, imagined hordes of freeloaders, or merely those who are different, working up fears of roving gangs of negro youth prowling the streets in search of mischief, along with invading Mexicans who want nothing more than to drive drunk and unlicensed and run over innocent white children. Another fear that seems rampant is women wanting to have a say over their own reproductive organs, and you might as well throw in negativity toward transgender folks who would like to use public restrooms: Hard-shell Republicans prefer they go pee-less.

It’s a jungle out there. At least, to hear the Republicans tell it. But what it’s really about, in earthier conservative circles, is a chance for people to feel important, to think they are standing on the lines of freedom, fighting back the zombie hordes. What drives these folks is fear; but for many, it’s a delicious fear.

It’s a chance for the bored and disappointed to play army, a way to justify having tons of guns and ammunition. They feel that if not for their vigilance, dead-eye aim, and concealment due to camouflaged pants and a Duck Dynasty cap, we would be standing on the edge of a precipice looking into the bowels of hell.

The reason that makes sense to me is because it ties together the racial, economic and cultural fears that Republicans have been fueling and on which Trump has capitalized. As Lansdale pointed out in the previous quote, any data that goes against those fears is merely dismissed. For these folks, the election of Hillary Clinton would mean falling off that precipice and descending into the bowels of hell.

What happens to these voters when their champion loses? That has become the question of the hour. As someone who actually believes in the rather antiquated notion of “personal responsibility,” it seems clear to me that it is largely up to them. The words President Obama said to our foreign adversaries in his first inaugural address fit very well because they capture how reconciliation is a two-way street. 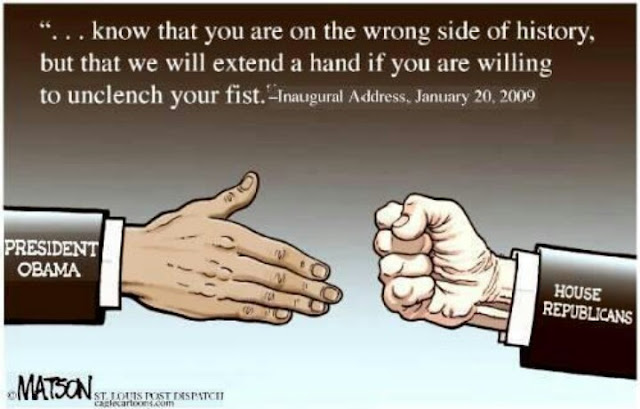