* Earlier today I wrote about Trump’s closing argument of hate. By way of contrast (demonstrating the absurdity of both-sider-ism), here is Clinton’s:

* I have said this repeatedly throughout this election season, so it will come as no surprise to anyone that I agree with Paul Waldman.

While it seems like every liberal has been legally required for the last year to say that Clinton is a deeply flawed candidate as a bit of throat-clearing before they defend or compliment her, the truth is that she has performed extremely well throughout this campaign. She beat back a surprisingly strong challenge from Bernie Sanders and built up a formidable organization that has excelled in nearly every task a modern presidential campaign requires. She’s been disciplined and dogged, committing very few mistakes and maximizing the opportunities she was presented with.

* From Kevin Drum: “Wall Street is Terrified of Donald Trump.” 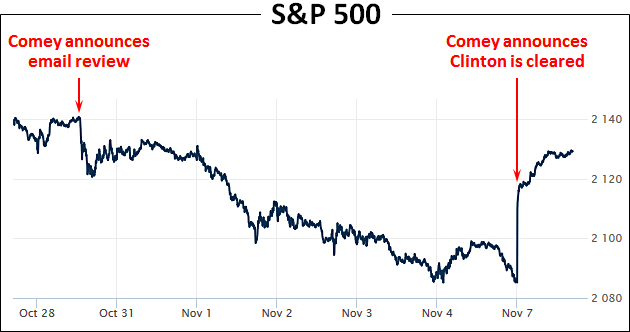 * There was some non-news from the Supreme Court on election eve.

Racing against the clock, the Supreme Court on Monday denied a last-minute request to restore a sweeping court order that might have kept the Donald Trump campaign from mobilizing poll-watching efforts in Ohio. Democrats argued that those efforts could intimidate and disenfranchise minority voters.

* On the other hand, the Department of Justice made this announcement:

The Justice Department announced today that its Civil Rights Division plans to deploy more than 500 personnel to 67 jurisdictions in 28 states for the Nov. 8, 2016, general election.

Although state and local governments have primary responsibility for administering elections, the Civil Rights Division is charged with enforcing the federal voting rights laws that protect the rights of all citizens to access the ballot on Election Day. Since the passage of the Voting Rights Act of 1965, the department has regularly monitored elections in the field in jurisdictions around the country to protect the rights of voters.

* If high voter turnout is bad news for Republicans, they’re sure not going to like news like this:

* Finally, today Janet Reno passed. I previously wrote that I had the pleasure of meeting Reno back in 1993. She was already a hero of mine at the time. Over her years of service, most people came to associate her with the Branch Davidian siege in Waco and then the myriad of scandals cooked up by Republicans against Bill Clinton. Because of all that, many forgot that she began her tenure with the kind of vision we don’t typically see in that office. This is how I will always remember what it meant to finally have a woman as Attorney General.

This childless 55-year-old prosecutor – a self-described “awkward old maid” – has become a crusader for America’s children.

“We will never have enough dollars to save everybody if we wait until they are 16 or 17,” she said.

Reno’s save-the-family campaign is squeezed between a steady stream of crises and controversies at the Justice Department – the dismissal of former FBI Director William Sessions, terrorists in New York, the tragic cult standoff in Waco, Tex. Meanwhile, she lobbies Congress to spend money on more police and prisons.

These subjects she discusses in careful, measured words.

But ask her about America’s children, and her eyes brighten behind thick glasses; her weathered hands punctuate a quick, bubbling stream of thoughts.

She touts her “national agenda for children” whenever she can, to whoever will listen, other Cabinet members included. Her wish list stretches from prenatal care to children’s nutrition to job-training for teens, most of it outside the realm of the Justice Department.

“We all have a responsibility to look beyond our narrow boundaries as prosecutor or attorney general to see more complete pictures,” Reno said.