2:30 am – The networks are calling Pennsylvania for Trump – which puts him at 266 electoral votes. With leads in Michigan, Wisconsin, Arizona and Alaska, the outcome seems inevitable.

There will be plenty of time to take stock of how this happened, and I’ll be the first to admit that I was wrong. I really didn’t see this one coming. But at least I’m not the only one. Over the coming days we’ll have to open our eyes to what we missed and learn as much as we can about how that happened. But I also know that being wrong in forecasting an election is not the same thing as being wrong about the candidates. Winning an election doesn’t make someone right and losing doesn’t make you wrong.

But as I write, it is the feelings about what just happened that are overwhelming. Certainly there is anger. But as is often the case, that is undergirded with a very real sense of fear about the future and grief over what this election says about the country that we love. This one goes deeper than most elections because it’s not just about a candidate we disagree with – but someone who poses a unique threat to almost everything we believe in. The idea that the same country that elected Barack Obama as president could turn around and eight years later elect Donald Trump is almost unfathomable. But it happened. All of the hopes that we had about perfecting our union and learning how to move forward are not gone – but have been dealt a painful blow.

This has been a tough night. It’s time to get some rest and take care of ourselves because we have a lot of work ahead of us. Hillary’s campaign slogan might wind up being more important than we ever thought it would be. In order to get through what’s coming, we’re going to have to be stronger together. – Nancy

11:25 pm – The way things look to me right now, Clinton has to win both Michigan AND Wisconsin or else Donald Trump is going to be our next POTUS. – Nancy

10:55 pm – Networks are calling Florida for Trump. This thing could all come down to Michigan.  – Nancy

10:50 pm We’re facing the potential of a repeat of 2000 in the sense that the popular vote winner may lose the Electoral College. As I noted earlier, the Detroit Free Press called Michigan for Clinton earlier, but the number crunchers aren’t sure why. It looks very close, and Michigan may very well decide who wins this election. Wisconsin also looks problematic for Clinton. People need to start pondering the unthinkable.

10:35 pm – Networks are now calling Colorado and New Mexico for Clinton. Ohio is called for Trump. At this point, Pennsylvania and Minnesota look pretty good for Clinton.  – Nancy

10:08 pm – Let’s hope that the Detroit Free Press is right because folks are freaking out about Michigan. Some networks are calling Virginia for Clinton now that she’s taken a slight lead there with over 90% of precincts reporting, but Trump still leads in Florida, North Carolina and Ohio. Some panic is setting in as stock futures plummet.

Here’s a little slice of good news from my home state.

9:07 pm– The networks have already determined that the Democrats will not take over control of the House, and Democratic senate losses in Florida and Indiana are disappointing for them and put their takeover of the Senate in serious doubt. – Martin

9:00 pm– Florida looks very, very close and possibly headed to Trump’s column. It should be remembered, though, in case of a very close outcome that Obama continued to add to his small margin in the days after Election night four years ago. This isn’t unusual. Because of slow counting in California, for example, his eventual popular vote margin grew substantially in the weeks after his reelection. I hope the country won’t need to go through another Florida recount, but it won’t be too painful if it won’t change the outcome.

Virginia is tighter than the Clintons would like, but I think it is going to tip their way. And, as expected, Ohio and North Carolina are very, very close.

If we thought this election would tip decisively Clinton’s way, that hasn’t happened. What I think we’ll see at the end of the night is just how amazingly polarized the country has become based on education level and urban/suburban vs. exurban/rural.

7:35 pm – Trump wins West Virginia but the rest of the states where polls closed at 7:30 are too close/early to call. Rob Portman is projected to win the Ohio senate race. – Nancy

Let’s see how long it takes them to call South Carolina and Georgia. – Nancy

This is going to be a short night.

In case I wasn't clear enough from my previous tweets:

Hillary Clinton will be the next President of the United States. #ElectionNight

6:12 pm– We have our first exit poll controversy over the Latino vote.

6:00 pm – Slate has teamed up with Votecastr to provide real-time estimates of votes in 7 states. This is pretty experimental stuff so I wouldn’t put a lot of stock in it, but here is what they say has happened as of about 5:00 pm. 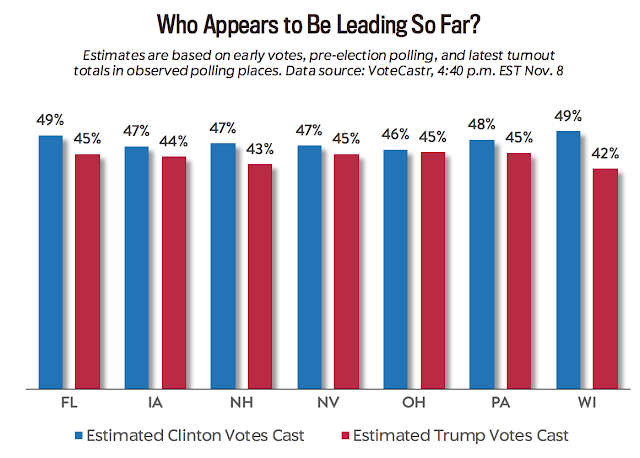 4:40 pm – Donald Trump is in Trump Tower and he has only the best information.

3:30 pm – Welcome to the Political Animal liveblog of the 2016 election. I hope you’ll stick around and chat with us as the afternoon/evening wears on.

Right now I’m thinking that the question on a lot of minds is how late you’ll have to stay up to know the results of the presidential race. The truth is – no one has a definitive answer on that. What we do know is that the networks aren’t likely to call it until after the polls close on the West Coast at 11 pm (all times are eastern). In the meantime, here is a pretty rainbow map of poll closing times from the folks at Daily Kos: 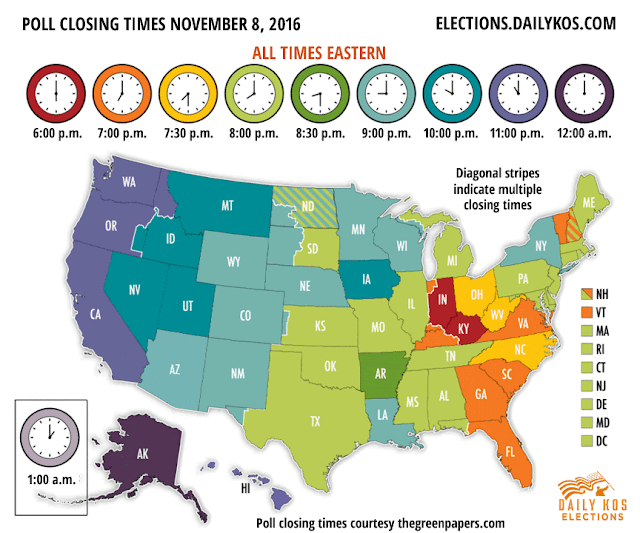 Steven Shephard and Charlie Mahtesian have a good rundown of how things will break out over the evening. These are the things that I’d highlight:

Those are my tips for the first things to watch for tonight. What are yours? -Nancy