For a lot of us on the left, Tuesday’s election results came as a huge shock. As I’ve mentioned before, a grieving process was in order and we all needed some time to adjust to how this changes the way we think about our country. The amount of time that requires will be different for each of us and so everyone needs to chart their own course.

Perhaps it’s because I’m finally catching up on my sleep after getting almost none on election night, but today the path forward is a little more clear to me. It seems that the same is true for Paul Krugman.

One natural response would be quietism, turning one’s back on politics. It’s definitely tempting to conclude that the world is going to hell, but that there’s nothing you can do about it, so why not just make your own garden grow? I myself spent a large part of the Day After avoiding the news, doing personal things, basically taking a vacation in my own head.

But that is, in the end, no way for citizens of a democracy — which we still are, one hopes — to live. I’m not saying that we should all volunteer to die on the barricades; I don’t think it’s going to come to that, although I wish I was sure. But I don’t see how you can hang on to your own self-respect unless you’re willing to stand up for the truth and fundamental American values…

The road back to what America should be is going to be longer and harder than any of us expected, and we might not make it. But we have to try.

That is essentially what I was saying when I wrote, “Let Us Not Grow Weary of Doing Good.” But that is not simply the patriotic or liberal thing to do. It’s also good for us individually.

One of the most important things I’ve learned in my life from facing challenges that seemed overwhelming is that, after I’ve taken care of myself emotionally, I have to reject the idea of being a victim. Frankly, that is what I hear when people describe the undirected anger of white people who fueled the election of Donald Trump. As Nathan Robinson wrote, that made them susceptible to the narrative of an authoritarian who promised to rescue them.

We can all admit with a degree of certainty that some bad things are about to happen in this country. If we assume that we are merely victims, we embrace the idea that we are powerless. That creates a negative feedback loop which not only becomes a self-fulling prophecy, it leaves us no option but to look for a savior.

To avoid feeling powerless, we have to take an honest look at our options. We’re not going to be able to reverse the outcome of this election and there are a lot of actions that Trump and the Republicans will take that we can’t stop. That’s the negative side of the ledger. But then we have to explore what we CAN do, and what is important to do – not because it guarantees an outcome – but because it is the right thing to do.

A lot of what that turns out to be will depend on our own position in the world and the skills we have to put on the table. It gave me a great jolt of power to realize that – regardless of what happens – I have this platform at the Washington Monthly to speak my peace. I am blessed to have that opportunity. I’m not under any illusion that what I write will change the world. But it just might enlighten a few folks and/or provide a ray of hope to someone who is thinking about giving up.

What this comes down to is that, if we assume that the only power worth having is that which enables us to be successful in stopping every bad thing that might happen, we relegate ourselves to cynicism. But if we find that one thing that we can do, then we tap into our own power – even if it feels insignificant in the big scheme of things. That’s why during the Bush/Cheney years, this quote from Gandhi became a touchstone for me. It’s time to roll it out again. 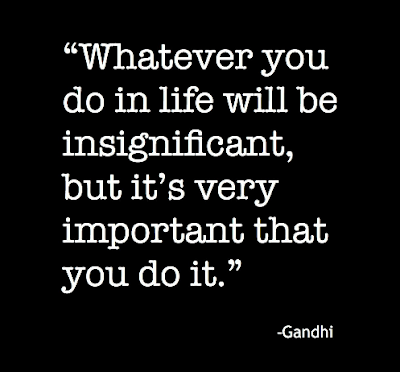