* My response to the growing concerns about the electoral college has been to point out that it is one of several ways that our founders demonstrated that equality was not a priority for them. But Lara Merling and Dean Baker demonstrate that it also provides an advantage to white voters.

While votes are roughly proportionately distributed, since even the smallest states are guaranteed three votes, the people in these states end up being over-represented in the Electoral College…

The states that are overrepresented in the Electoral College also happen to be less diverse than the country as a whole…White people tend to live in states where their vote counts more, and minorities in places where it counts less. This means that the Electoral College not only can produce results that conflict with a majority vote, but it is biased in a way that amplifies the votes of white people and reduces the voice of minorities. 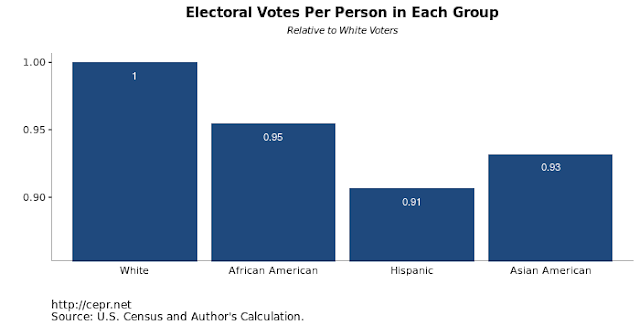 Medicare is one of the most successful government programs ever created – it’s been a success story for decades. The Republicans’ ideological and visceral hatred of government could deny millions of senior citizens across the country the care they need and deserve. To our Republican colleagues considering this path, Democrats say: make our day. Your effort will fail, and this attack on our seniors will not stand.

* Here is a bit on Trump’s choice for Secretary of Commerce:

For 24 years as a banker at Rothschild, Ross developed a lucrative specialty in bankruptcy and corporate restructurings. He founded his own firm, W.L. Ross, in 2000 and earned part of his fortune from investing in troubled factories in the industrial Midwest and in some instances generating profits by limiting worker benefits. That region swung hard for Trump in the election on the promise of more manufacturing jobs from renegotiated trade deals and penalties for factories that outsourced their work abroad.

A specialist in corporate turnarounds, Ross buys distressed or bankrupt companies at steep discounts, then seeks to shave costs and generate profits. Some of those cost reductions have come from altering pay and benefits for workers. Since 2000, his firm has invested in more than 178 companies…

In early 2006, the Sago coal mine owned by Ross exploded, triggering a collapse that killed a dozen miners. Federal safety inspectors in 2005 had cited the West Virginia mine with 208 violations.

* Meanwhile, a writer at a think tank funded by our next Secretary of Education, Betsy DeVos, basically thinks that our prohibition against child labor is not good for kids.

Let us not just teach our children to play hard and study well, shuffling them through a long line of hobbies and electives and educational activities. A long day’s work and a load of sweat have plenty to teach as well.

* On a more uplifting note, here’s something to be thankful for:

The Fight for $15 has been incredibly successful since 100 fast-food workers first went on strike on Nov. 29, 2012, in New York City. The movement they helped create went 5-for-5 during the most recent election, winning ballot initiatives in Arizona, Colorado, Maine and Washington, while defeating a subminimum wage law for teenagers in South Dakota. And with the anniversary of its original strike approaching, that movement is only gaining steam.

* Here is an item we can add to Obama’s legacy that the Republicans can’t touch.

“The Obama effect,” as some researchers have called it, is especially apparent when I am in community with young people. Black children, in particular, sit up a little taller, smile warmly with glittering eyes, and lean in whenever I talk about the efforts of the First Family to support their learning and to provide greater access to opportunity. For youth who have grown up with Obama, the image of the American president will never be the same. And unlike any other time I can recall, our First Family has managed to make education cool.

Outdoor retailer REI is closing its physical and online stores for the second Black Friday in a row, giving about 12,000 employees a paid day off so they can hit the trails, slopes or rivers. They’ll be joined by an estimated 2.7 million people who’ve pledged to participate across the country, taking advantage of free park admission in at least 13 states and free rides to parks in five cities…

About 540 organizations, from the Alaska Wilderness League to the Yosemite Conservancy, are helping organize events, and companies from Subaru to Google to prAna are using social media to fuel interest. The National Park Service is using its sway to encourage Americans to visit parks, especially those near urban areas: “So go ahead and enjoy some natural beauty, breathe the fresh air and burn off some of those holiday calories. There will always be leftovers.”

If you’re interested in finding a place to #OptOutside this weekend, the Dept. of Interior has you covered.