* A little over a week ago, the man that Donald Trump will nominate to be the next Secretary of Health and Human Services – Rep. Tom Price – outlined a timetable for getting rid of Medicare as we know it.

The head of the House Budget Committee said Thursday that lawmakers are eying an overhaul of Medicare next year.

He said it would be tackled through the budget tactic in the Senate called “reconciliation,” which allows major spending-related bills to pass the upper chamber without a veto.

* I agree with Josh Marshall. Although repeal of Obamacare is a huge concern, it is troubling that more attention isn’t being paid to this important issue that could roll back the progress we have depended on for half a century.

The upshot of the Ryan plan is significantly increasing the cost of what society pays for the medical care of seniors and then making seniors pay dramatically more out of pocket. All with none of the bedrock gaurantees Medicare provides.

* Speaking of Paul Ryan, today he listed his top 4 priorities for the next Congress.

* Immediately after the election, Clinton supporters were asked to put aside their concerns for the good of the country and unite in giving the new administration a chance. It might be nice if our newly elected leader would step up to the plate and reach out to those who voted for the other candidate. Instead, he is planning a “thank you” tour for his supporters.

President-elect Donald Trump will begin a “Thank You Tour” on Thursday in Cincinnati, replicating the arena events that powered his surprise campaign, three of his transition officials said…

His post-election tour may take him to “swing states we flipped over,” George Gigicos, Trump’s director of advance, told reporters on Nov. 17.

* I recently entertained the possibility that this election marked the beginning of an electoral map realignment. David Jarman has a bit of a different take on the same idea. He starts with data from a pre-election poll conducted by the Public Religion Research Institute. 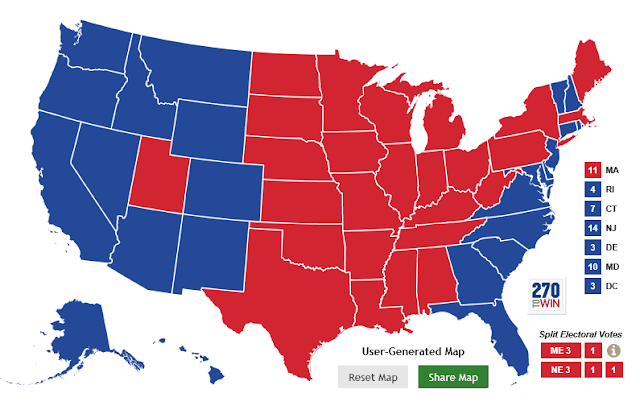 * Given that Texas has the highest rate of uninsured people in the country – with a whopping 46 percent whose household income is below $16,395 still uninsured – this could be the beginnings of a major disaster.

Make that two U.S. states with homegrown Zika. Texas health officials have recorded what is likely the first case of local transmission in Brownsville, a southern Texas city on the Mexican border…

No other local cases have been recorded in the area, but Texas officials aren’t floored by this development as towns across the border have reported local cases of Zika, and the Aedes aegypti mosquito — the bloodsucker that carries the virus — is all over the area. “We knew it was only a matter of time before we saw a Zika case spread by a mosquito in Texas,” said John Hellerstedt, the state health commissioner, in a statement.

* Finally, there are times when I think that perhaps Molly Ivins saw what was coming.