* Perhaps this is just a trial balloon meant to please her fans, but honestly, I wouldn’t put anything past Trump right now.

* What Tom Price as Sec. of HHS is to Obamacare, Steven Mnuchin as Treasury Secretary is to Dodd-Frank Wall Street reform.

Steven Mnuchin, a long-time Goldman Sachs banker tapped by Trump to lead the Treasury, told CNBC’s “Squawk Box” Wednesday morning that going after the law will be one of his top priorities.

* The Wall Street Journal seems to think this is a bad thing:

The federal government is on track to forgive at least $108 billion in student debt in coming years, according to a report that for the first time projects the full cost of plans that tie borrowers’ payments to their earnings.

The report, to be released on Wednesday by the Government Accountability Office, shows the Obama administration’s main strategy for helping student-loan borrowers is proving far more costly than previously thought…

The overall government student loan portfolio—currently totaling $1.26 trillion of debt outstanding, including privately issued loans backed by the government—continues to generate a profit, though these projected revenues are dwindling as more people go into income-based repayment.

Senate Budget Committee Chairman Mike Enzi (R., Wyo.) ordered the report last year amid a sharp increase in enrollment in income-driven repayment plans, which the Obama administration has heavily promoted to help borrowers avoid default. The most generous version caps a borrower’s monthly payment at 10% of discretionary income, which is defined as any earnings above 150% of the poverty level.

* During his Nov. 14th press conference, President Obama said this:

In this situation, we’re turning over a country that has challenges, has problems, and obviously there are people out there who are feeling deeply disaffected — otherwise, we wouldn’t have had the results that we had in the election. On the other hand, if you look at the basic indicators of where the country is right now, the unemployment rate is as low as it’s been in eight, nine years. Incomes and wages have both gone up over the last year faster than they have in a decade or two. We’ve got historically low uninsured rates. The financial systems are stable. The stock market is hovering around its all-time high, and 401(k)s have been restored. The housing market has recovered.

* Several data points that have been released recently put an exclamation point on those remarks. For example, on Obamacare:

The number of people who have trouble paying their medical bills has plummeted in the last five years as more people have gained health insurance through the Affordable Care Act and gotten jobs as the economy has improved.

A report from the National Center for Health Statistics released Wednesday shows that the number of people whose families are struggling to pay medical bills fell by 22 percent, or 13 million people, in the last five years.

And that’s good news, according to consumer and health policy advocates.

“The effect on families is profound,” says Lynn Quincy, director of the Healthcare Value Hub at the Consumers Union. “Health care costs are a top financial concern for families, far above other financial concerns.”

Quincy says the number one determinant of whether people can pay medical bills is whether they have insurance.

The U.S. economy grew faster than initially thought in the third quarter, notching its best performance in two years, buoyed by strong consumer spending and a surge in soybean exports.

Gross domestic product increased at a 3.2 percent annual rate instead of the previously reported 2.9 percent pace, the Commerce Department said in its second GDP estimate on Tuesday. Growth was the strongest since the third quarter of 2014 and followed the second quarter’s anemic 1.4 percent pace.

Job growth could show a healthy rebound for November, and beat estimates, after payroll processor ADP said Wednesday that businesses added a better-than-expected 216,000 jobs for the month…

Economists expected ADP to report 169,000 job gains, according to a Bloomberg survey. They predict the Labor Department on Friday will record 180,000 additional jobs in the public and private sectors.

* Finally, for a lot of us, this is what made America great.

Not like the brazen giant of Greek fame,
With conquering limbs astride from land to land;
Here at our sea-washed, sunset gates shall stand
A mighty woman with a torch, whose flame
Is the imprisoned lightning, and her name
Mother of Exiles. From her beacon-hand
Glows world-wide welcome; her mild eyes command
The air-bridged harbor that twin cities frame.
“Keep ancient lands, your storied pomp!” cries she
With silent lips. “Give me your tired, your poor,
Your huddled masses yearning to breathe free,
The wretched refuse of your teeming shore.
Send these, the homeless, tempest-tost to me,
I lift my lamp beside the golden door!” 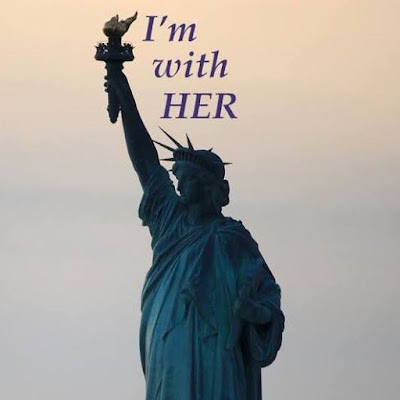