Ever since 2010, Republicans have joined in unison to malign Obamacare and promise to repeal it. On occasion, they would add a promise to replace the law, but have never managed to articulate very clearly what that would look like. During the election, their nominee simply said that he’d come up with something great.

Now that Trump has been elected and the Republicans control both houses of Congress, it’s been interesting to watch the various machinations of the party over how to go about keeping their promises. According to a new survey by Kaiser, it seems as if the American people are also pretty divided and confused about what they want. For example: 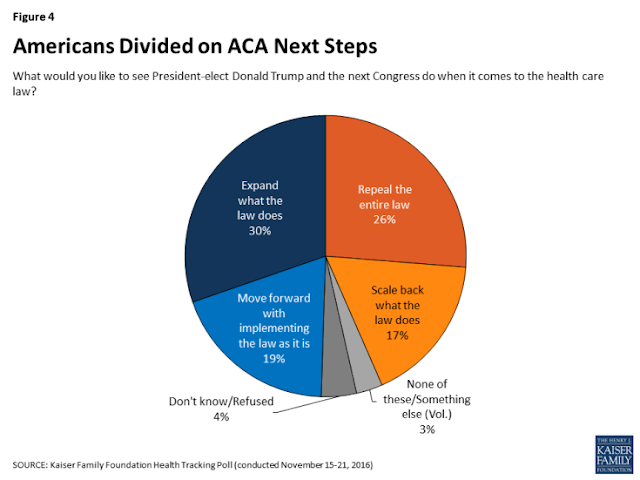 What we might be witnessing is just a bit of the morning-after regret we witnessed from Britons after the Brexit vote. But regardless of how the public feels, the Republicans have boxed themselves in to a position on this one and they’ll have to give repeal/replace their best shot.

What seems to be developing is a commitment to repeal the law, with a question about whether or not to have that go into effect immediately or delay implementation until a replacement plan can be developed. The assumption is that repeal will be the easier part – especially since Republicans came together on a bill last year that was vetoed by President Obama. However, even that might be more difficult that a lot of people assume.

The bill Republicans passed did not completely repeal Obamacare – but included enough that the entire edifice would have crumbled if it had gone into effect. It’s interesting to compare the particulars that were contained in the legislation with information from the Kaiser poll on the percentage of Americans who approve of the provision.

The real sticking point in passing a bill to eliminate these parts of Obamacare will likely come with the provision on Medicaid expansion. Republican legislators voted on the original bill knowing that President Obama would veto it. Those who face re-election in blue/swing states or red states that adopted the expansion might have a tougher call to make now that they can be assured that Trump will sign on.

Assuming Republicans can get that done – the real uphill battle will be coming up with a replacement plan. As Rachael Bade and Burgess Everett report, they plan to rely on their old trick of setting up a ticking time bomb.

With buy-in from Donald Trump’s transition team, GOP leaders on both sides of the Capitol are coalescing around a plan to vote to repeal the law in early 2017 — but delay the effective date for that repeal for as long as three years.

They’re crossing their fingers that the delay will help them get their own house in order, as well as pressure a handful of Senate Democrats — who would likely be needed to pass replacement legislation — to come onboard before the clock runs out and 20 million Americans lose their health insurance.

Anyone who remembers how the sequester budget cuts were set up as the time bomb that would bring legislators together on tax and spending issues will not be encouraged by this development. It also presents a tough call for Democrats. If Obamacare has basically been gutted via a repeal bill, to what extent do they work with Republicans to come up with reasonable alternatives? At least for now, Sen. Patty Murray says that the threat won’t work, “They break it, they buy it.”