I was just talking to someone who had a recent conversation with a Trump-supporting family member who said that, for the first time in eight years, they feel a sense of hope. We commiserated about how we’re feeling the opposite right now. It is a stark reminder of how this country is so divided that we seem to be living in two different worlds. For her relatives, Trump has slain the villain they’ve been told is the cause of their uncertainty and fear. For us…he is the source of our uncertainty and fear.

This all reminded me of something President Obama said during a special report from Vice titled, “A House Divided.” As we all search for answers to what Democrats need to do differently in the future to avoid the kind of outcome we saw in this election, he said that there are some structural problems facing our politics that won’t be solved by nominating/electing the right person. One of those structural issues is that Americans seem to be living in different worlds created by the news they consume.

A recent report from Pew Research demonstrates how that has developed over the last few years. In attempting to demonstrate how Americans view President Obama’s legacy differently, they provided this information on their views of recent history.

We just completed an election where the weight of Bill Clinton’s legacy was hung around Hillary like an anvil. And yet more Americans think his accomplishments outweigh his failures than think that about Barack Obama. But the partisan breakdown is where that stands out. Forty-five percent of Republicans think Clinton’s accomplishments outweigh his failure – compared to only 13% for Obama. Is that because more Republicans actually favored Clinton’s accomplishments or because the right wing media has created a hermetically-sealed bubble that has distorted Obama’s? I would suggest more of the latter.

It’s not just Fox News anymore. In the Wall Street Journal you have an author like Healther MacDonald who suggests that “Trump Can End the War on Cops.” Her assertion is that President Obama started this non existent war.

During the memorial service for five Dallas police officers gunned down in July by an assassin who reportedly was inspired by Black Lives Matter, Mr. Obama announced that black parents were right to “fear that something terrible may happen when their child walks out the door”—that the child will be fatally shot by a cop.

The consequences of such presidential rhetoric are enormous, especially when amplified by the media. Officers working in high-crime areas now encounter a dangerous level of hatred and violent resistance. Gun murders of officers are up 68% this year compared with the same period last year.

That last line appears to be in keeping with a claim that has pretty consistently been fact checked as misleading. But to suggest that the President’s words at the memorial for Dallas police officers is the problem is, frankly, either insane or a deliberate lie. Take a look at this and tell me where you seen an attempt to incite a war on cops.

We know that the overwhelming majority of police officers do an incredibly hard and dangerous job fairly and professionally. They are deserving of our respect and not our scorn. And when anyone, no matter how good their intentions may be, paints all police as biased or bigoted, we undermine those officers we depend on for our safety. And as for those who use rhetoric suggesting harm to police, even if they don’t act on it themselves — well, they not only make the jobs of police officers even more dangerous, but they do a disservice to the very cause of justice that they claim to promote.

MacDonald goes on to spread the same lie Donald Trump has told throughout his campaign and transition.

Police have cut way back on pedestrian stops and public-order enforcement in minority neighborhoods, having been told repeatedly that such discretionary activities are racially oppressive. The result in 2015 was the largest national homicide increase in nearly 50 years.

In  other words, her suggestion is that because President Obama empathized with the fear black parents have had about their children for generations, the national homicide rate has increased more that it has in nearly 50 years. Here’s what the truth looks like: 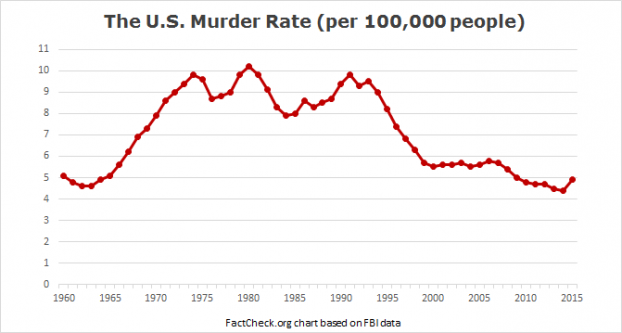 It’s true. The number of homicides increased by 10.8% in 2015. But even the article MacDonald linked to says this:

Crime trend experts said they expected politicians to overplay the significance of the new numbers and to react with “hysteria.”

“You lost 50lb. You gained back a couple. You’re not fat,” said Jeffrey Butts, the director of the Research & Evaluation Center at John Jay College of Criminal Justice. “That doesn’t mean you shouldn’t look at your behavior, because the trend is not good.”

MacDonald is doing just what those crime trend experts warned about…reacting with hysteria. But it is also exactly what Neil Strauss warned about in terms of how demagogues manipulate us.

If there is a crack in human psychology into which demagogues wriggle, it is by offering psychological relief for the anxiety created by uncertainty. Because when people are unsure – or made to feel unsure – and not in control of the safety of their finances, families, possessions, community or future, their natural inclination is to grasp for certainty.

This is where a good scapegoat comes in. “That’s something Trump creates very well: There’s us – real Americans – then there are Muslims and immigrants,” Bader says. “Fascist governments have risen in times of economic change because they offer simple answers to complicated personal questions. And one of the most popular ways people can have certainty is by pointing to a villain to blame things on.”

In this case, the villain is those criminals (read: black and brown people) who need to be controlled by bringing back law and order.

This is but one example of the kind of thing too many Americans are fed by right wing media on a daily basis. Those who bought into what MacDonald wrote are not likely to read this or any other publication that calls out the lies. And so we create two different realities – or the “structural problem” President Obama was talking about.

Great Democratic candidates with a powerful message are not likely to break through that divide. LET ME BE CLEAR: that doesn’t mean that they shouldn’t try. It’s just that the best messenger with the best message won’t be enough until we find a way to tackle the structural problem.