“Because of what’s happening and the spirit and the hope I was just called by the head people at Sprint and they’re going to be bringing 5,000 jobs back to the United States,” Trump told reporters Wednesday outside his Florida resort, Mar-a-Lago.

As Kevin Drum notes, most of the media didn’t buy it. It turns out that these 5,000 jobs were announced by Sprint back in April and are part of a big investment from their parent company SoftBank that was discussed in October.

But just as most of the press only skimmed the surface of what Trump promised in exchange for temporarily saving a few Carrier jobs, that isn’t the whole story for Sprint.

SoftBank’s Masayoshi Son acquired a majority stake in Sprint in 2013. The following year they announced plans to buy T-Mobile. That would have merged the 3rd and 4th largest market leaders (after AT&T and Verizon). Those plans were abandoned after the U.S. Federal Communications Commission and Justice Department signaled they were against a theoretical merger. Since then, Sprint has struggled to contain its debt, while T-Mobile rebounded. Here is what Alex Sherman , Todd Shields , and Scott Moritz reported about all this back in August.

There’s a key figure who will determine if Son makes another run at T-Mobile: the yet-to-be named new head of the FCC. If Son feels that person is more amenable to a combination to take on market leaders AT&T Inc. and Verizon Communications Inc., he will probably try again, said the people, who asked to not be identified because the matter is private.

Guess who was at Trump Tower meeting with the president-elect on December 6th, touting the big U.S. investment he had announced in October. 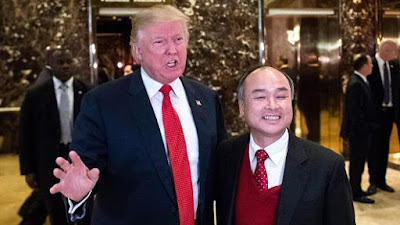 Do you suppose that the prospect of a new FCC chair who would be friendly to mergers came up in the meeting between Trump and Son?

If so, Trump isn’t necessarily lying when he takes credit for those 5,000 jobs. Just as he promised that his tax cuts would dwarf the $65 million/year that Carrier would save by moving jobs to Mexico, it is very possible that he promised Son smooth sailing for the merger of Sprint and T-Mobile. After all, tax cuts and a de-regulated business environment are two of the things at the top of any Republican’s list of ways to help the people they call “job creators.”

Ultimately this doesn’t bode well for an issue that I pointed to earlier this week as one of the stories that resonated in 2016 – the fact that “virtually every industrial sector today…is under the control of a handful of oligopolistic corporations.” It should come as no surprise that the Trump administration will welcome rather than reject the kind of corporate monopolies that are stifling competition in this economy.

That doesn’t mean that we here at the Washington Monthly will go quietly into the night on promoting the importance of addressing this issue. It simply means that we will do as I have just done today…dig a little deeper to uncover this kind of deal-making that is going on behind the scenes.

If that is something that you think will be more important than ever with a Trump administration, I hope that you’ll join with us by making a tax deductible contribution to the Washington Monthly today. Thanks!