The U.S. intelligence report on Russian involvement in the 2016 election addressed three areas:

It is important to note that on #2, the report says this:

Russian intelligence obtained and maintained access to elements of multiple US state or local electoral boards. DHS assesses that the types of systems Russian actors targeted or compromised were not involved in vote tallying.

In other words, their hacking of electoral boards did not affect the ultimate vote totals (this time). But that is why Sec. of Homeland Security Jeh Johnson recently designated election infrastructure as a critical subsector, bringing federal assistance and protections to bear on these systems.

Those who want to focus our attention on the question of whether or not we can trust what the intelligence report says zero in almost exclusively on the findings related to #1. The president-elect’s statement after his briefing on these matters implied that the hacking/leaking might have been done by China, other countries, outside groups or people. On CNN this weekend, Glenn Greenwald said, “On the key claims that Putin directed this hacking and that he did so to elect Donald Trump, there is no evidence for it … just CIA assertions over and over, and that just simply isn’t enough.”

There is a sense in which Greenwald is right. The report did not include the methods the intelligence community used to reach their conclusions and that is not likely to happen in the future. So there is an element of trust involved in believing what they are reporting. But as Martin wrote recently, perhaps the best proof is what Donald Trump has said and done in regards to Russia and Putin.

Beyond that, all of this discussion ignores what the intelligence report said about #3. There is a wealth of corroborating evidence for that outside of what was included in the report. Those of us who read the report from Adrian Chen in the NYT back in the summer of 2015 were not surprised by this report at all.

This whole affair prompted me to go back and re-read an article in the Atlantic by Peter Pomerantsev that was written back in 2014, a few months after the Russian annexation of Crimea. In it he details how Putin has used these same tactics in his own country – as well as places like Ukraine and the Baltic states. Two and a half years ago, Pomerantsev was chronicling the invention of what we’ve come to call “fake news.”

At the NATO summit in Wales last week, General Philip Breedlove, the military alliance’s top commander, made a bold declaration. Russia, he said, is waging “the most amazing information warfare blitzkrieg we have ever seen in the history of information warfare.”

It was something of an underestimation. The new Russia doesn’t just deal in the petty disinformation, forgeries, lies, leaks, and cyber-sabotage usually associated with information warfare. It reinvents reality, creating mass hallucinations that then translate into political action…

In today’s Russia…the idea of truth is irrelevant. On Russian ‘news’ broadcasts, the borders between fact and fiction have become utterly blurred. Russian current-affairs programs feature apparent actors posing as refugees from eastern Ukraine, crying for the cameras about invented threats from imagined fascist gangs…The Kremlin tells its stories well, having mastered the mixture of authoritarianism and entertainment culture. The notion of ‘journalism,’ in the sense of reporting ‘facts’ or ‘truth,’ has been wiped out…

The point of this new propaganda is not to persuade anyone, but to keep the viewer hooked and distracted—to disrupt Western narratives rather than provide a counternarrative. It is the perfect genre for conspiracy theories, which are all over Russian TV…

Ultimately, many people in Russia and around the world understand that Russian political parties are hollow and Russian news outlets are churning out fantasies. But insisting on the lie, the Kremlin intimidates others by showing that it is in control of defining ‘reality.’ This is why it’s so important for Moscow to do away with truth. If nothing is true, then anything is possible.

One of the key judgements in the U.S. intelligence report is ominous.

We assess Moscow will apply lessons learned from its Putin-ordered campaign aimed at the US presidential election to future influence efforts worldwide, including against US allies and their election processes.

As many are noting, the next target for a campaign like this from Russia is Angela Merkel in Germany’s election next year.

The German chancellor is a perfect target. Germany is holding general elections next autumn, and with politicians sympathetic to Moscow on the rise, she may well be running for her fourth term as the sole European leader willing to stand up to a newly assertive Russia.

Since the annexation of Crimea in 2014, Ms. Merkel has been the most consequential voice for punishing Russia. The next year, she welcomed a million refugees into Germany, and pushed the rest of Europe to do the same — thus, in the view of Russian ethno-nationalists, diluting European culture. And she still believes in a united, integrated European Union, a bastion of liberal values and, at least implicitly, a political and economic bulwark against Russia.

Right on cue comes this, with an assist from Steve Bannon’s Breitbart.

German media and politicians have warned against an election-year spike in fake news after the rightwing website Breitbart claimed a mob chanting “Allahu Akbar” had set fire to a church in the city of Dortmund on New Year’s Eve.

After the report by the US site was widely shared on social media, the city’s police clarified that no “extraordinary or spectacular” incidents had marred the festivities.

The local newspaper, Ruhr Nachrichten, said elements of its online reporting on New Year’s Eve had been distorted by Breitbart to produce “fake news, hate and propaganda”.

The importance of understanding what Russia and Brietbart are doing goes beyond its impact on helping to elect Donald Trump. Jochen Bittner, political editor for the weekly newspaper Die Zeit, put it this way:

What Russia does today is very much the digital version of what we Germans, before 1989, termed “Zersetzung.” The term is hard to translate, but it’s best described as the political equivalent of what happens when you pour acid on organic material: dissolution and disintegration.

The methods of Zersetzung are to cast doubt on the basic norms of the Western liberal order and its institutions; to distort and thereby discredit the purposes of the European Union, NATO and the free-market economy; to erode the credibility of the free press and free elections. The means of Zersetzung include character assassination and, through the spreading of lies and fake news, the creation of a gray zone of doubt in which facts struggle to survive.

The stakes on this one are high. This quote from Voltaire is incredibly prescient. 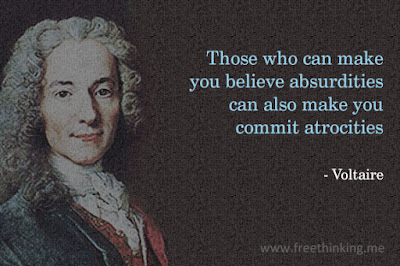