Now that we know that Jeff Sessions met with the Russian ambassador in his private Senate office on Thursday, September 8th, 2016, we need to try to put that time period in some context so we can assess the plausibility that the conversation didn’t relate primarily to the presidential election.

Now, this meeting came right after the Labor Day break (September 3rd-5th). Just prior to the break, Senate Minority Leader Harry Reid went very public with a letter to the FBI he wrote in which he expressed grave concern that Russia was seeking to interfere in the election and possibly to even tamper with the tabulation of the vote.

Some of the items that alarmed Sen. Reid included information that had just been publicly disclosed about the Russians breaching and exfiltrating voter files in Arizona and Illinois, as well as allegations that a Trump foreign policy advisor named Carter Page had been in contact with Kremlin officials in July, that Trump advisor and friend Roger Stone was in contact with WikiLeaks, and that there was classified information that the Russians had provided Wikileaks with the emails from John Podesta and the Democratic National Committee.

Going back a little further in time, Trump’s campaign manager Paul Manafort had been forced to resign his position on August 19th amidst revelations that he had been paid bribes by the pro-Russian Ukrainian government of Viktor Yanukovych. To give you a reminder of how things were playing out on this issue in the campaign, here is how the Clinton campaign responded at the time:

“Paul Manafort’s resignation is a clear admission that the disturbing connections between Donald Trump’s team and pro-Kremlin elements in Russia and Ukraine are untenable,” Clinton campaign manager Robby Mook said in a statement. “You can get rid of Manafort, but that doesn’t end the odd bromance Trump has with Putin.”

Now, the former MI6 officer Christopher Steele sent the FBI the following memo in mid-September, a week after the second meeting between Sessions and Russian ambassador Sergei Kislyak (notice that Kislyak is specifically mentioned): 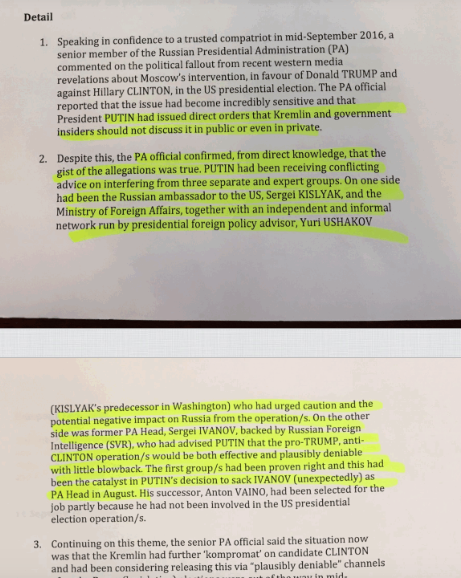 It’s significant that Kislyak was reportedly part of a Kremlin faction that had been urging caution about interfering in the election on behalf of Trump.  The leader of the opposing faction, longtime Putin confidante and chief of staff Sergei Ivanov, was unexpectedly fired on August 12th, setting off a lot of speculation among kremlinologists. What they didn’t know was that Ivanov was punished for bringing heat on Russia.

And the heat would only grow. In addition to Harry Reid’s letter to the FBI, several Democrats on the House Committee on Oversight and Government Reform wrote Director Comey on August 30th, begging him to investigate “overt and covert acts of Trump campaign officials on behalf of Russian interests.” The senior Democrats on the House and Senate Intelligence Committees, Rep. Adam Schiff and Sen. Diane Feinstein, would follow up with their own letter on September 22nd, citing “briefings we have received…that the Russian intelligence agencies are making a serious and concerted effort to influence the U.S. election” and calling on “President Putin to immediately order a halt to this activity” since “orders for the Russian intelligence agencies to conduct such actions could come only from the very senior levels of the Russian government.”

Also of significance is another part of Christopher Steele’s dossier: 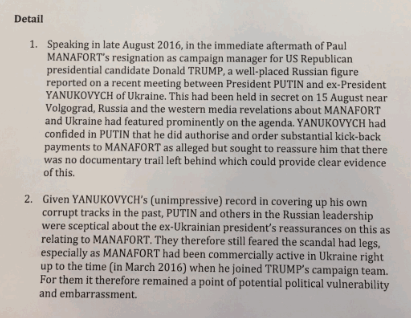 If this is accurate, Putin fired his chief of staff on August 12th and met with Yanukovych on August 15th. Both events came on the heels of former acting CIA Director Michael Morrell writing an August 5th endorsement of Hillary Clinton in the New York Times in which he said that “Trump is not only unqualified for the job, but he may well pose a threat to our national security,” and “in the intelligence business, we would say that Mr. Putin had recruited Mr. Trump as an unwitting agent of the Russian Federation.”

It’s possible, too, that Putin became aware that “the FBI applied for a warrant from the foreign intelligence surveillance (Fisa) court over the summer in order to monitor four members of the Trump team suspected of irregular contacts with Russian officials” and that this led to his mid-August actions.

We now suspect that three of those four Trump team members were Paul Manafort, Roger Stone and Carter Page.

Speaking of Carter Page, he had been recommended to Trump by someone. When Julia Ioffe tried to figure out who was responsible back in September, Jeff Session’s former staffer Stephen Miller claimed not to know who Carter Page was and Sessions’ current chief of staff Rick Dearborn wouldn’t return her calls. Both men are now installed in the Oval Office. Dearborn is the White House Deputy Chief of Staff for Legislative, Intergovernmental Affairs and Implementation and formerly served as the executive director of the Presidential Transition Team for Trump. Miller is one of Trump’s most senior advisers. Ioffe didn’t call them for no reason, however. She knew they had both worked on putting together Trump’s foreign policy team.

Ioffe’s article on Page came out on September 23rd, so her reporting coincided with the Sessions-Kislyak meeting on September 8th.

We are supposed to believe that with all this controversy swirling around Carter Page and Russian hacking and with the Kremlin sacking people and looking to cover their tracks, that Sessions and Kislyak sat down together that day to talk about issues unrelated to any of it. Sessions claims that the meeting was unexceptional, just like many other meetings he’s held with ambassadors from many other countries. And the purpose of the meeting was to discuss issues pertaining to his duties as a member of the Senate Armed Services Committee and not at all related to his role as a senior foreign policy advisor to the Trump campaign. Of course, no one else on the Armed Services Committee met with Kislyak in this time period, so there’s no corroboration that the committee was working on anything of particular interest to Kislyak at the time.

So, you tell me. Do you think Sessions told the truth to Sen. Patrick Leahy when he wrote that he had no contact “with anyone connected to any part of the Russian government about the 2016 election, either before or after election day?”

Does that pass your smell test?

For my part, all I smell is perjury.