* There is a reason why Paul Ryan wanted to keep the Republican health care plan secret and force committees to vote on it prior to seeing the scoring from the Congressional Budget Office. Christopher Jacobs has the scoop:

Based on my conversations with multiple sources close to the effort, the Congressional Budget Office (CBO) had indicated to congressional staff that the prior House framework could see at least 10 million, and potentially up to 20 million, individuals losing employer-sponsored health insurance. Further, CBO stated that that House framework, even after including a refundable tax credit for health insurance, would not cover many more people than repealing Obamacare outright.

Not only would it take us back to pre-ACA coverage levels, ten to twenty million people with employer-sponsored plans would lose their insurance as well. Apparently this news sent the Republicans back to the drawing board. But after all these years of talking about how they will repeal/replace Obamacare, either they are intent on taking health care away from millions of Americans, or they don’t have any idea what they’re doing.

UPDATE: While I was writing this the House GOP released their Obamacare replacement plan. The story above is about the previous “secret” version.

* Meanwhile, CBO’s report on Obamacare is not likely to get any coverage on Fox News or Breitbart.

The Congressional Budget Office said Friday that its projections for the federal government’s spending on the Affordable Care Act’s coverage provisions in 2019 are now a third lower than what they were when the law was passed in 2010.

CBO Director Keith Hall said in written responses to questions posed by the House Budget Committee that the CBO expects the federal government to spend $148 billion in 2019 on the law’s coverage provisions, down from the $214 billion estimated when the law was passed.

Hall cited a number of reasons for why the law is costing the federal government less than originally expected. One is that less people are using the individual market than anticipated, lowering the feds’ spending on things like the subsidies for insurance premiums. Additionally, Medicare and Medicaid’s costs are coming in under expectations, as are the costs of private insurance.

* Today Trump signed a revised travel ban. If you’re wondering how it’s different from the first one, Caitlin MacNeal has you covered.

1. It was rolled out without much public fanfare
2. It will not take effect immediately
3. Iraqis are now excluded from the travel ban
4. Green card holders are not targeted
5. The order contains language denying its predecessor discriminated against any religion

Notice that #5 is the only one that attempts to address the issues raised by the courts.

* Perry Bacon has a fascinating piece about “The Eight Power Centers of the Trump Administration.” Based on what I’ve seen so far, it seems pretty accurate. I’d just rename a couple of them as follows:

* Democrats are hoping that Jon Ossoff might have a chance to win the special election on April 18th to fill the Congressional seat vacated by Tom Price because Trump only beat Clinton by one point is that district. A Republican in the state isn’t buying it and actually said this:

Jere Wood, the longtime Republican mayor of Roswell, disagrees. “This isn’t a youth vote up here,” he told me at his office, when I asked him about the makeup of the Sixth. “This is a mature voter base. If someone is going down the list, they’re gonna vote for somebody who is familiar.” He paused. “If you just say ‘Ossoff,’ some folks are gonna think, ‘Is he Muslim? Is he Lebanese? Is he Indian?’ It’s an ethnic-sounding name, even though he may be a white guy, from Scotland or wherever.”

Apparently to Mr. Wood, “a mature voter base” is one where people make racist assumptions about a candidate’s name.

Russian hackers are targeting U.S. progressive groups in a new wave of attacks, scouring the organizations’ emails for embarrassing details and attempting to extract hush money, according to two people familiar with probes being conducted by the FBI and private security firms.

At least a dozen groups have faced extortion attempts since the U.S. presidential election, said the people, who provided broad outlines of the campaign. The ransom demands are accompanied by samples of sensitive data in the hackers’ possession.

* Finally, since Trump decided not to go to the White House Correspondents Dinner, maybe they should ask Nancy Pelosi to fill in. Apparently the lady’s got game. 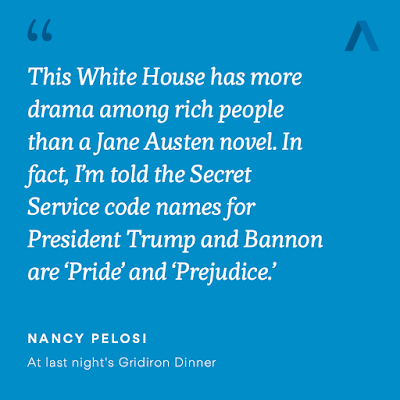