Right wing media intends to give them an assist with this. For example, Paul Bedard just wrote an article for the Washington Examiner (which was picked up by Fox Nation and probably spread to countless other sites) titled: “Census: Immigration to bust 100-year record, continue surging.”

The legal and illegal population of foreign-born immigrants living in America will break a 100-year-old record in just six years — and will continue to smash records for the rest of the century, according to a new analysis of U.S. Census Bureau data.

Already 13.5 percent of the U.S. population, immigrants will surge to 15 percent in 2023, according to Steven Camarota, the director of research for the Center for Immigration Studies.

At a conference to discuss the impact of immigration on public schools, he said “the share will hit 15 percent in just six years and that will surpass the all time high in the United States reached in 1890.”

Sounds ominous, doesn’t it? So I decided to do a little fact-checking. Here is what I found:

For some actual data, we can turn to the Migration Policy Institute, “an independent, non-partisan, non-profit think-tank dedicated to the study of the movement of people worldwide.” There we find the following:

MPI also provides us with this chart showing the U.S. immigrant population and share over time. 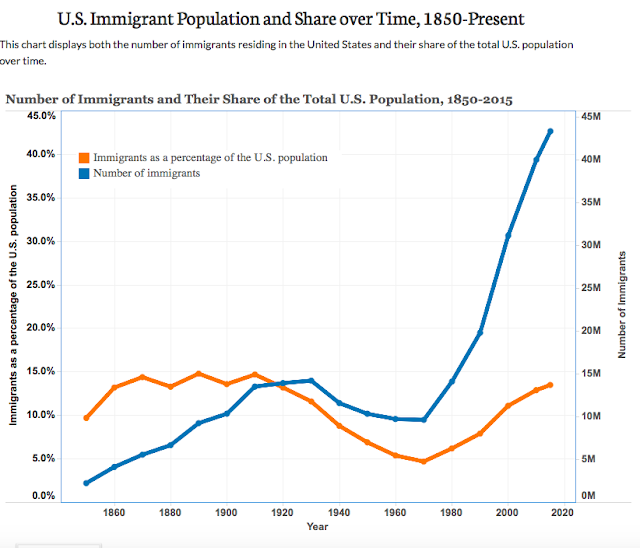 Here is what they provide about the history of those trends:

Data on the nativity of the U.S. population were first collected in 1850. That year, there were 2.2 million immigrants in the United States, representing nearly 10 percent of the population.

Between 1860 and 1920, the immigrant share of the overall population fluctuated between 13 percent and nearly 15 percent, peaking at 14.8 percent in 1890, mainly due to high levels of immigration from Europe.

Restrictive immigration legislation in 1921 and 1924, coupled with the Great Depression and World War II, led to a sharp drop in new arrivals. As a result, the foreign-born share steadily declined between the 1930s and 1970s, reaching a record low of approximately 5 percent in 1970. Since 1970, the share and number of immigrants have increased rapidly, mainly as a result of large-scale immigration from Latin America and Asia made possible by the abolishment of national-origin admission quotas by Congress in 1965.

In other words, nothing significant has changed about immigration policy since 1965 that would lead to the kind of fear-mongering we’re seeing from the right (other than the race of the majority of immigrants, which has gone from White to Black/Brown/Asian). While the number of immigrants in this country continues to rise, their share of the population is still lower than what we saw prior to the Great Depression and WWII.

This campaign to stir up fear of immigrants is nothing but white nationalism dressed up in 21st century clothes. It consists of nothing more than hate concealed in lies.