Thomas Edsall—a champion of the white working class—has written an article pointing to a very real issue. He provides his own interpretation of what might be the root cause of the politics of resentment that led to the election of Donald Trump. There are some things he gets right and some he misses. Breaking that down can help us build a case to overcome the divide that currently exists between those who focus on economic anxiety versus identity politics to explain what happened.

Here is the issue Edsall identifies.

The devastating recession that began at the end of 2007 and officially ended in June 2009 was the most severe downturn since World War II.

The political, social and even medical consequences of this recession have been duly noted, but even so the depths of its effects are only now becoming clear. One we’re still learning more about is how the rural, less populated regions of the country (known among demographers as nonmetropolitan counties), which already suffered from higher than average poverty rates, recovered from the recession at a far slower pace than more populous metropolitan counties.

The fact that people living outside big cities were battered so acutely by the recession goes a long way toward explaining President Trump’s victory in the last election.

To demonstrate the fact that non-metro areas recovered more slowly from the Great Recession, Edsall provides this graph: 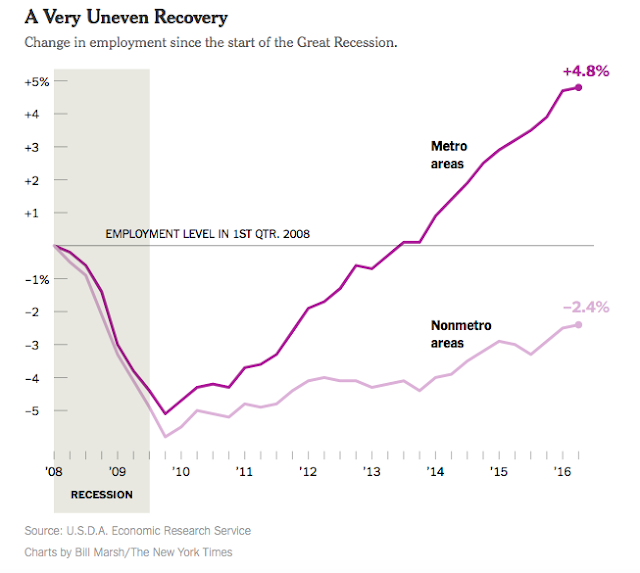 He goes on to discuss the reasons for this trend and I encourage you to go read the whole thing. But the great omission Edsall makes is that he focuses on the changes in economic status for metro and non-metro areas without discussing where things stood before the Recession.

I’d like to first of all address that from a personal perspective. For over thirty years I worked with urban families who had lived in deep poverty for generations. Of course they were predominantly people of color – but the point is that the economic divide has always existed in metro areas.

One of my most profound memories of what happened during the Great Recession was when a board member (white, upper middle class) of the nonprofit I worked for asked some of the staff (mostly urban African American) how the recession was affecting our clients. Initially there was silence as the staff looked at each other trying to figure out how to respond. Eventually their answer was unanimous. They said that it hadn’t really had much impact because our clients had always lived in deep poverty. That remained the case during the recession.

That helps provide a good example of why white non-metro people are so stressed. The Great Recession and its aftermath was the first time many of them felt what people of color have been experiencing for decades. All of this was a fairly new phenomenon in of some those communities.

Tracy Ross made a similar observation back in 2013 when local communities began to express concern about the rising rate of poverty in the suburbs following the Great Recession.

…many of the headlines responding to the trend discuss the “suburbanization” of poverty or declare that poverty is “moving from the city to the suburbs,” as though poverty is no longer an urban problem. In fact, the opposite is true: A larger share of the population in cities—20.9 percent—is poor compared to the population in suburbs—11.4 percent. While suburban poverty presents a unique set of challenges, we have yet to win the war on urban poverty, and several challenges persist for poor city residents, including concentrated poverty, crime, affordable-housing shortages, a lack of investment in good public-transit systems, job loss, and segregation…

As we continue to address poverty, we can’t turn our back on cities while searching for solutions to the next frontier of poverty. Cities are still the engines of the U.S. economy and have the potential to create opportunities for people throughout their regions. Policymakers must look beyond the headlines and take this analysis as a renewed call to address poverty in comprehensive ways across all jurisdictions.

To some ears, the emphasis on non-metro and suburban poverty is mirrored by the sympathetic response we are witnessing to the opioid epidemic, which affects mostly white people, as compared to the mass incarceration resulting from the war on drugs that affects mostly people of color.

The problem with the politics of resentment is that it casts these issues as a zero sum game in which one side only benefits at the other’s expense. That is something the Republicans have been fueling with the Southern Strategy for years now. By feeding on the racism of white people, African Americans (and more recently Hispanics and other immigrants) have been cast as the ones who have been benefiting at their expense. That became the basis for Donald Trump’s presidential campaign.

One way to address the zero sum nature of the politics of resentment is to engage in what Rev. William Barber describes as “fusion politics,” a term that dates back to the Reconstruction era in North Carolina. Barber himself began to replicate fusion politics when he became president of the North Carolina NAACP back in 2005.

In North Carolina, we’re showing once again that when people of different faiths and colors come together and demand change from a moral perspective, it touches the conscience of a nation.

The idea that Democrats should craft an agenda around addressing the needs of either white non-metro voters or urban voters of color is not only a recipe for disaster politically, it also reinforces the zero sum game the Republicans have exploited so successfully for the past 50 years. Whether we call it “fusion politics” or something else, the only way forward is to do it together.