* One of the reasons why it is difficult to ever believe anything that comes out of Trump’s mouth is because he lies so blatantly. He almost always does so without any reservations – even when he doesn’t have a clue about what he’s saying.

So much of this is new to Mr. Trump that only after he publicly accused Mr. Obama of having wiretapped his telephones last year did he ask aides how the system of obtaining eavesdropping warrants from a special foreign intelligence court worked.

* Perhaps Michael Tomasky has come up with a way to communicate the consequences of Trump’s ignorance to some of his most devout supporters.

Everyone, including The Daily Beast, took note of the president’s six flip-flop Wednesday. And it’s true that every one of those huge reversals was in the direction of sanity. He embraced NATO, kind of. He recognized that the North Korea-China thing is complex. He acknowledged that Janet Yellen is a serious policy person. And so on.

I guess this is growth. But let’s be real here: This is “growth” in the most remedial sense possible…

Here’s a metaphor for you. Having Donald Trump as president is like the Dallas Cowboys hiring as their head coach a guy who’d never even coached a Pop Warner team. Who knew nothing about different defensive coverages. Nothing about stunts. Nothing about offensive formations. And then somebody sat him down after he was coach and told him these things, and he said ‘Gee, nobody knew that all this was so complicated.’”

* It’s hard to even contemplate how much the Attorney General doesn’t understand about justice.

Attorney General Jeff Sessions restated his opposition to agreements made between the Justice Department and a number of police departments during the Obama administration on Thursday, saying that the consent decree agreements “can reduce the morale of police officers.”

“I do share your concern that these investigations and consent decrees have the, can turn bad,” Sessions told radio host Howie Carr, in an interview surfaced by CNN. “They can reduce morale of the police officers.

Excuse me, but since when does the prospect of reduced morale absolve someone of being held accountable? I’m sure anyone who has ever been convicted of anything by a judge or jury left the courtroom with reduced morale. We don’t tend to take that into consideration when assigning consequences.

* The fact that this is even up for discussion tells us how extremist this administration remains.

President Donald Trump’s most senior advisers will huddle next week to resolve long-simmering tensions over whether the United States should stay in the Paris climate change agreement, a major point of dispute between the moderate and nationalist wings of the White House…

The ideological distance between Trump’s economic and foreign policy and George W. Bush’s has collapsed…

Trump’s ethnonationalism reverses a trend in the Republican Party: Beginning with Bush, it had repudiated its Southern strategy and attempted to craft a racially inclusive message that would broaden the constituency for its oligarchic economic agenda. Bush and his ideological heirs sought to compromise on immigration while taking seriously minority concerns about discriminatory law enforcement. Trump has reversed Bush’s aspiration for a racially inclusive party completely, while rediscovering his economic blueprint.

An idea that sprung from a law professor’s tweet after President Trump’s inauguration will unfold Saturday on the Mall, where thousands of protesters plan to call on Trump to release his personal tax returns. The demonstration is expected to be the largest of more than 100 affiliated protests planned across the country.

The Tax March, which falls on the nation’s traditional April 15 deadline to file taxes, is expected to be one of the most high-profile demonstrations of the Trump era since protesters around the world participated in women’s marches — marches that served as an unprecedented rebuke to Trump’s presidency on his first full day in office.

* Finally, this cartoon from Mike Luckovich does a good job of summing up the week in Trump. It answers the question of whether we witnessed an evolution or an eruption. 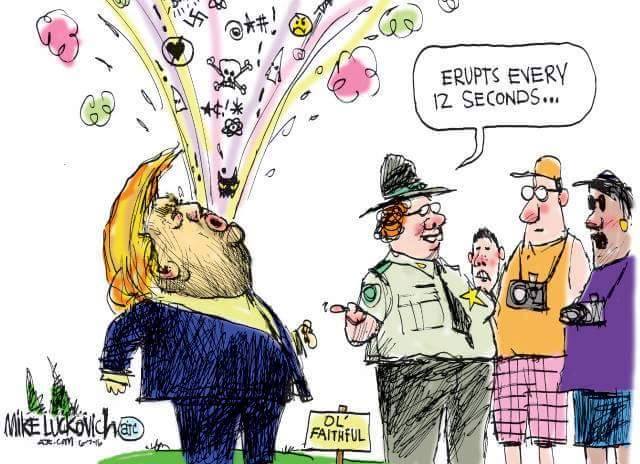