Over the past three months as I watch what is going on with this administration, my mind wanders back to something Michelle Obama said to Oprah in her final interview as First Lady. Specifically, it was her statement that “now we’re feeling what not having hope feels like.”

Michelle was right. Things can feel pretty hopeless these days. That is what happens when you feel powerless to change things. As citizens, we don’t have the power to remove Donald Trump from office until 2020. And even if we did, we’d face a Pence presidency – which doesn’t exactly represent much improvement.

One of the lessons I’ve learned in my life (often the hard way) is very similar to the focus of the serenity prayer. When I feel discouraged, I let go of the things I’m powerless to change and focus on the things I can. None of us is ever completely powerless. We just have to figure out where our power lies. That’s what gives us hope.

Another key ingredient to hope is the timeline we set for change. In our culture of instant gratification, that can be a hard one. But history reminds us of things like the fact that it was 9 years from the Montgomery Bus Boycott to the passage of the Civil Rights Act of 1964. A time horizon of immediate gratification would have doomed hope in ever getting that done. That is what Rubem Alves captured in this portion his poem on the question, “What is hope?”

Let us plant dates
even though those who plant them will never eat them.
We must live by the love of what we will never see.
This is the secret discipline.
It is a refusal to let the creative act be dissolved
in immediate sense experience
and a stubborn commitment to the future of our grandchildren.

Recently, Ruy Teixeira wrote, “7 reasons why today’s left should be optimistic.” I don’t agree with all of them, but he makes some good points. Here’s the complete list:

Teixeira didn’t do a great job of explaining #7. Here is what Marshall Ganz wrote about that:

Anger and hope aren’t mutually exclusive. As a matter of fact, successful community organizing requires that our anger meet head on with a sense of hope to conquer inertia and despair.

Other items on Teixeira’s list, like the fact that the gains of the left are sticky and that the left can solve people’s problems, mirror what I have often written about the power of pragmatism. The way the resistance has battled back against the repeal of Obamacare is a great example of how that is playing out. Obamacare is sticky primarily because it solved a lot of problems for people. Challenging Republican efforts to repeal it is also a good example of choosing a battle where we have the power to win.

After the 2016 election, a lot of people abandoned the idea of finding much hope in the fact that the left’s coalition is growing while the right’s is declining. But I would submit that that was an error of timing rather than a misreading of the future. As we’ve all learned, demographics is not destiny. But as Teixeira writes, “it’s still hugely important.”

…live by the white non-college swing, die by the white non-college swing. The utter dependence of the GOP on this voter demographic means that they need to not only maintain their extraordinary 2016 levels of support among these voters, they need to drive that support ever higher in future elections, to neutralize continued growth in the Democrats’ coalition. That’s a tough assignment.

He goes on to point out that the share of white non-college voters is dropping 3 points every election cycle. If we focus only on the 2018 midterms, that won’t likely have much impact. But to the extent that the GOP continues to put all their stock in that demographic, they are charting a losing course over the long term.

In the meantime, Ronald Brownstein and Leah Askarinam point out where there is some cause for hope in what we just learned from the special election in Georgia.

…in recent weeks the race to replace Price has transfixed the political world, because the seat crystallizes two electoral trends that could decide the struggle for the House in the 2018 midterm election. Centered on white-collar communities in the northern Atlanta suburbs, the district is one of 48 Republican-held House seats that share two key characteristics that could potentially boost Democrats. First, it has a greater share of college-educated whites than the national average of 34.2 percent. Second, Trump performed worse in the district last November than Romney did in 2012.

The congressional districts they identify overlap a lot with the list of 23 Republican seats put together by Daily Kos that went for Hillary Clinton in the presidential race. 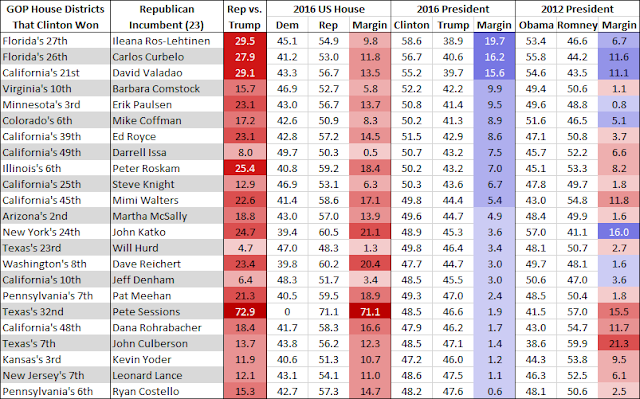 This is not to suggest that Democrats can take back the House in 2018. It is way too early to make that call. But these lists represent the kind of tangible hope that should inspire action.

My final thought about hope is that perhaps this is the key ingredient: