* Here’s the latest from Gallup:

Donald Trump averaged 41% job approval during his first quarter as president, 14 percentage points lower than any other president in Gallup’s polling history…The average first-quarter rating among post-World War II presidents elected to their first term is 61%. 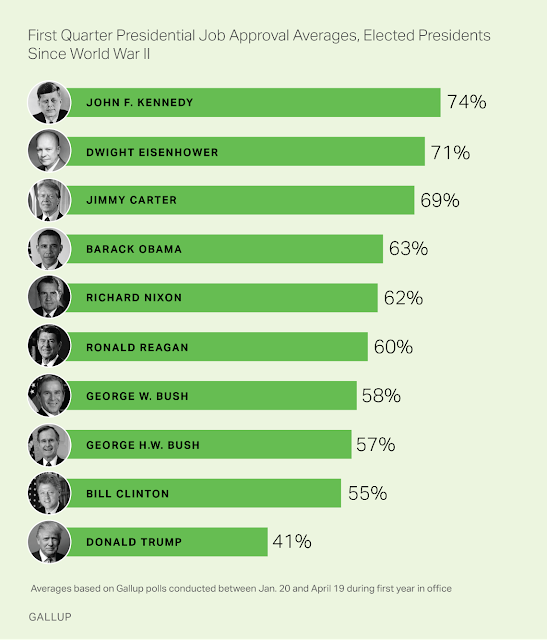 * Reuters has another scoop on how Vladimir Putin worked to influence our election.

They described two confidential documents from the think tank as providing the framework and rationale for what U.S. intelligence agencies have concluded was an intensive effort by Russia to interfere with the Nov. 8 election. U.S. intelligence officials acquired the documents, which were prepared by the Moscow-based Russian Institute for Strategic Studies, after the election.

* This should be interesting.

President Trump will confront a familiar figure in the lawsuit over a DREAMer who was deported by federal immigration agents: U.S. District Judge Gonzalo Curiel.

He’s the judge who oversaw a lawsuit involving Trump University who Trump accused of being biased because of his “Mexican heritage.” Curiel, who was born in Indiana, approved a $25 million settlement between Trump and students who claimed they overpaid for real estate seminars.

* Are you old enough to remember the ad about “this is your brain on drugs?” The actress who starred in that, Rachael Leigh Cook, appears in a new one that takes the whole frying pan motif in a new direction.

* Perhaps you’ve been hearing about the book “Shattered: Inside Hillary Clinton’s Doomed Campaign.” If so, you might want to read what an actual Clinton staffer, Christina Reynolds, had to say about it.

I’m not writing to debate where the blame lies for the loss. While I’ve certainly got opinions (and a list of my own mistakes I’d love to take back), I’ll leave that debate to the media. And I’m not here to fact check, except to note that contrary to the book, I was not the research director — that was a talented man named Tony Carrk who led a terrific team.

I wanted to speak out because after spending most of the campaign watching some people question the enthusiasm and our supporters, it’s hard to read a depiction of the campaign that paints a dedicated, cohesive team as mercenaries with questionable motives who lacked a loyalty to a candidate described as “imperial” and removed from the campaign.

That’s just not the campaign, the staff or the candidate I was in the trenches with for 18 months.

* Finally, Stephen Colbert got back into character last night to bid farewell to Bill O’Reilly.