OMB Director Mike Mulvaney has become the Trump administration’s point person on the federal budget. Just a few weeks ago he was spending a lot of his time telling us that the White House didn’t want to “waste” taxpayers money on programs that don’t work. For example, that is the reason he gave for reducing funds to the Community Development Block Grant program, which includes things like Meals on Wheels and after-school programs. He also said, “We are not spending money on climate change anymore. We view it as a waste of your money.”

You’d think that he would use the flip side of that argument for things the Trump administration wants to spend money on. And yet when asked about Congressional support for funding the president’s border wall, he said that GOP leadership was on board because “they know it’s a priority for the president.” In other words, Trump made a campaign promise and now it’s time to pony up the money for it, regardless of whether or not it works.

That quote from Mulvaney was part of an article by the Wall Street Journal that found this:

Not a single member of Congress who represents the territory on the southwest border said they support President Donald Trump’s request for $1.4 billion to begin construction of his promised wall, according to a Wall Street Journal survey, testing the administration’s ability to reach a deal on government funding next week.

Most lawmakers representing the region—both Democrats and Republicans—said they are opposed and many said they have unanswered questions. A few were noncommittal, but not a single member of the House or Senate representing the region expressed support for the funding request. That includes nine members of the House and eight senators across four states: Texas, New Mexico, Arizona and California.

The Republicans who represent border states/districts were not simply concerned about what funding the border wall would do to the deficit. They also suggested—based on their own experience up close—that it is a waste of money.

“As representatives of the communities that make up our southern border, we recognize the need for robust border security and infrastructure to ensure public safety and increase cross border commerce,” Reps. Will Hurd (R., Texas) and Martha McSally (R., Ariz.) wrote in a letter last month to senior administration officials. “However, we also have an obligation to be good stewards of taxpayer dollars and as such have a number of questions.”…

Ms. McSally, for example, chairs the Homeland Security border security subcommittee, and in an interview, she said walls do little to stop criminal organizations from getting across the border. “They will go over, through or under physical barriers, sometimes pretty quickly,” she said.

Mr. Hurd, whose district includes 800 miles along the border, describes a wall as “the most expensive and least effective way to secure the border.”

Just one example of why building a wall along our Southern border is such a waste of money comes from the trends in terms of undocumented people in this country, as reported by the New York Times. 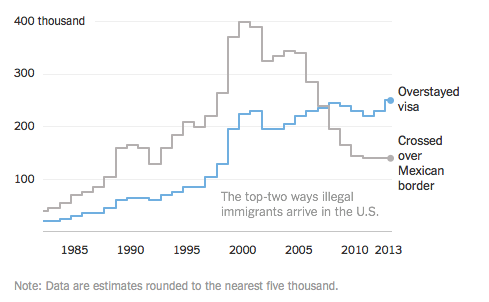 Donald Trump came on the national political scene by promoting the racist lie about Obama’s birth certificate. He then opened his presidential campaign with the racist lie that hoards of Mexican rapists and drug dealers were crossing the border to threaten our security. His answer to address that issue was this ridiculous notion that we should build a wall. It was all nonsense cooked up to fear-monger based on racism and ignorance.

Now Mulvaney and this administration are threatening to shut down the government if Congress doesn’t appropriate money for this boondoggle, even as Republicans who know this issue best are telling us that it is a waste of money.

It is Trump’s ego that is at stake, as is always the case when this administration takes a stand. We should note the so-called “fiscally conservative” Republicans who are willing to stroke his ego at our expense.