Unless Trump starts a war with North Korea before the day is over, he’s running out of time to put any points on the board in his first 100 days. The two major issues that were hanging have now been settled.

First of all, there won’t be a vote in the House on repealing Obamacare.

Despite pressure from the White House, House GOP leaders determined Thursday night that they didn’t have the votes to pass a rewrite of the Affordable Care Act and would not seek to put their proposal on the floor on Friday.

Earlier this week I was feeling a little guilty for not writing more about how horrible the latest iteration of Trumpcare was. I just couldn’t stir up enough interest to write about it. When I read what Kevin Drum wrote about it, I finally realized why.

It’s increasingly obvious that Republicans aren’t actually trying to pass a health care bill. They just want to be able to tell their base that they tried. And President Trump wants to erase the taste of defeat from the first health care bill…

In the beginning, I think Paul Ryan really did want to pass something, mainly so that it would make his tax cut plan easier to pass. But he’s given up on that. At this point he just wants a piece of paper that gets 218 votes and demonstrates that the Republican caucus isn’t hopelessly inept. He knows it will be DOA in the Senate, but at least it will get health care off his plate once and for all. Then he can move on to cutting taxes on the rich, which is what he really cares about.

It’s been clear since the first AHCA bill failed that neither Ryan nor Trump really cared about getting this done – and where the hell has McConnell been for the last week? If none of them care, why should I?

On the issue of whether or not we’ll have a government shutdown to celebrate Trump’s 100th day – that’s not going to happen either.

A short-term spending agreement to keep the federal government open for another week overwhelmingly passed Congress on Friday.

The House voted 382 to 30 on Friday to approve the deal and the Senate unanimously approved it a short time later. House and Senate negotiators are set to work through the weekend to finalize a longer-term deal that would fund the government through the end of the fiscal year in September.

It’s true that the bill passed overwhelmingly in the House. But this screen cap of the vote demonstrates an important point. 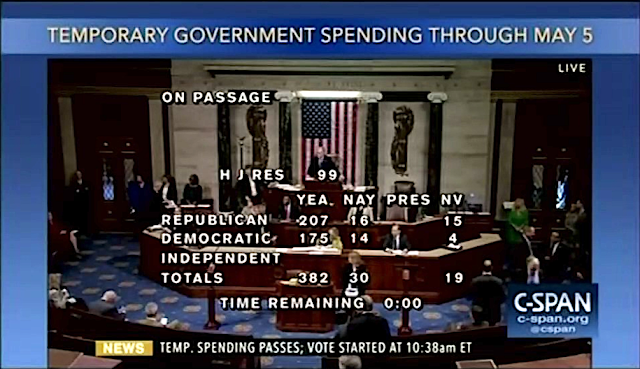 Ryan and the White House were not able to line up enough votes to get it passed without Democratic help. That is very likely to influence next week’s negotiations on a longer-term spending bill. In the Senate, Minority Leader Schumer allowed a voice vote and so we don’t know exactly how things will progress in that chamber.

None of this does anything to change the narrative that has developed over the last 100 days about Trump’s inability to get much of anything done and the Republican’s inability to govern. While that falls massively short of being good news, it might be the best we are going to get under these circumstances.