* Today there was another bombshell dropped about Trump’s leak of classified information to the Russians. This time it came from the New York Times:

The classified intelligence that President Trump disclosed in a meeting last week with Russian officials at the White House was provided by Israel, according to a current and a former American official familiar with how the United States obtained the information. The revelation adds a potential diplomatic complication to the episode.

Israel is one of the United States’ most important allies and a major intelligence collector in the Middle East. The revelation that Mr. Trump boasted about some of Israel’s most sensitive information to the Russians could damage the relationship between the two countries. It also raises the possibility that the information could be passed to Iran, Russia’s close ally and Israel’s main threat in the Middle East.

* Sheera Frenkel reports on the response in Israel.

“We have an arrangement with America which is unique to the world of intelligence sharing. We do not have this relationship with any other country,” said the officer, who spoke to BuzzFeed News on condition of anonymity as he was not granted permission to speak to the press.

“There is a special understanding of security cooperation between our countries,” they said. “To know that this intelligence is shared with others, without our prior knowledge? That is, for us, our worst fears confirmed.”

“There has to be trust for this sort of arrangement. I cannot speak for Israel’s entire security apparatus, but I would not trust a partner who shared intelligence without coordinating it with us first,” said the officer.

* Trump has a visit to Israel scheduled as part of his upcoming trip abroad. Rumors are starting to swirl about that.

Government sources are speculating to me that Trump's visit may be canceled. https://t.co/PLRop3qbOv

* In retrospect, this was incredibly prescient:

U.S. intelligence officials reportedly warned their Israeli counterparts to exert caution in sharing top secret information with Donald Trump’s administration for fear of it being passed to Russia and then to Moscow’s ally and Israel’s arch-enemy, Iran.

Discussions between U.S. and Israeli security services prior to Trump’s inauguration on January 20 gave rise to concerns that sensitive intelligence might exchange hands between him and the Russian government, Israeli newspaper Yedioth Ahronoth reported in January.

* National Security Advisor H.R. McMaster held a press conference prior to the news that Israel was the U.S. partner who had provided the intelligence that Trump shared with Russia. In retrospect, his remarks are both telling and disturbing. It’s clear that the one point McMaster wanted to get across was that the information Trump shared was “wholly appropriate.”

At the time, the National Security Advisor knew that the intelligence had come from Israel. But it is unlikely that he realized that the rest of us would know soon. Making a case that it was “wholly appropriate” for the president to share classified intelligence from Israel with Russia is not an argument any sentient being would ever make.

* In light of all this, a few paragraphs from an article by Maggie Haberman and Glenn Thrush are getting a lot of attention.

There is a fear among some of Mr. Trump’s senior advisers about leaving him alone in meetings with foreign leaders out of concern he might speak out of turn. General McMaster, in particular, has tried to insert caveats or gentle corrections into conversations when he believes the president is straying off topic or onto boggy diplomatic ground.

This has, at times, chafed the president, according to two officials with knowledge of the situation. Mr. Trump, who still openly laments having to dismiss his first national security adviser, Michael T. Flynn, has groused that General McMaster talks too much in meetings, and the president has referred to him as “a pain,” according to one of the officials.

In private, three administration officials conceded that they could not publicly articulate their most compelling — and honest — defense of the president: that Mr. Trump, a hasty and indifferent reader of printed briefing materials, simply did not possess the interest or knowledge of the granular details of intelligence gathering to leak specific sources and methods of intelligence gathering that would do harm to United States allies.

Let’s suss out the three points:

1. McMaster and others are afraid to leave POTUS alone in meetings with foreign leaders,
2. McMaster might be skating on thin ice with the president, who appears to regret firing Michael Flynn, and
3. The best defense of this president’s behavior is that he’s not interested enough to overcome his ignorance.

Whew, what a nightmare.

* If, like me, all that news puts a strain your mental health, you might want to consider perusing the entries National Geographic has posted in their Photographer of the Year contest. Here is the one that speaks to me right now, perhaps for obvious reasons. 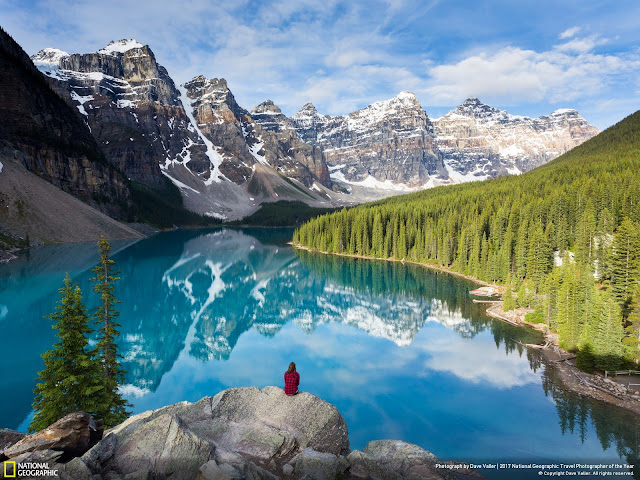 From the photographer Dave Valler:

My best ever travel experience. I was desperate to come back to Moraine Lake because I had been here twice before as a child on holiday and it had become my favourite memory. Coming back as an adult meant I was able to finally capture in person the views that I’d always seen on postcards and when a woman came to just sit and wonder at the incredible view I knew I had a good shot. The combination of the sheer beauty of Canada and fulfilling a personal dream made this shot my personal favourite.