The Associated Press opened their fact-check on recent statements from Donald Trump with a dire statement that just so happens to be true.

President Donald Trump can’t be counted on to give accurate information to Americans when violent acts are unfolding abroad.

But as many have been asking for months now, what happens when the topic du jour turns from “violent acts abroad” to crises here at home?

Beyond terrorism, the weather outside (even up here in what I call the “tundra”) is also reminding us that, while summer doesn’t officially start for a couple of weeks, most of us are already there temperature-wise. That means that it is time to be aware of some things, including this prediction: 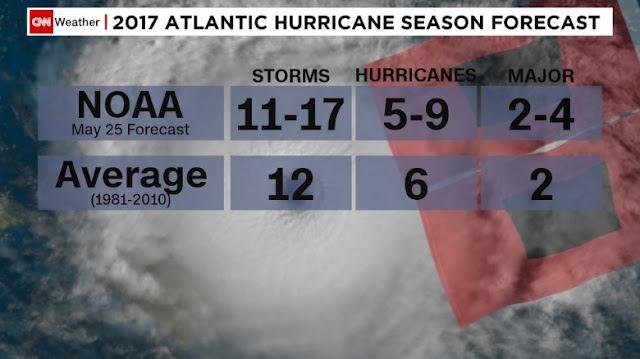 What happens when we have to start relying on this administration for information about hurricanes and/or other dangerous weather-related events? Here are some numbers to keep in mind from the Obama years:

Over the past eight years, Fugate [FEMA Director from 2009-2017] has dealt with 910 disaster declarations, far more than any FEMA director in history. In 2011 alone, FEMA responded to a record-shattering 242 disasters (the previous record had been 158 in 1996). He battled big storms made bigger by climate change, managed to earn praise from both parties in Congress, and restored public faith in the federal government’s ability to respond to natural disasters, taking it from 33 percent after Katrina to 75 percent after Sandy, according to Gallup.

That last number is a reminder that, when things are handled competently, most of us don’t notice. But nothing shatters the trust of the American public more profoundly than a poorly handled natural disaster.

Zika, the mosquito-borne virus that triggered public health alarm bells last summer, has receded from the spotlight. But, experts say, expect the virus to pose a renewed threat this year.

How great of a threat? That’s where it gets tricky.

No locally acquired cases of the virus have been reported in the United States this year. But as public health agencies gear up for mosquito season, uncertainty remains around what resources states may need and whether they will receive adequate federal support. In addition, researchers still have questions about how the virus works and its long-term effects. These forces could complicate efforts to track outbreaks and provide accurate information about prevention and disease management.

The conservative agenda is bound up in trying to convince Americans that we don’t need a strong federal government. But it is during times of natural disasters and public health crises that the lives of everyday Americans can be put directly at risk, shaping their view of what is or isn’t the appropriate role of the federal government.

The public now faces three challenges from the Trump administration related to these concerns: (1) the lack of leaders in place in critical agencies, (2) the fact that public service experience is not a priority for this administration, and (3) the lack of trust the president has garnered from the public. Any one of those three alone could lead to a real disaster for Americans. But all three together signal a potential nightmare-in-the-making this summer.