[W]hen he was asked, … ‘[W]hat did [Trump] say about the rationale for firing Comey,’ the attorney general refused to answer. That goes to the heart of the question of whether the president may have obstructed justice.”

Between the lines: Matt Miller, an Obama Justice Department official who has become a go-to commentator on the investigation, emailed me: “[N]o immediate public revelation, but a red flag in front of the bull named Bob Mueller. … If Sessions had a good answer about conversations with Trump about firing Comey, he would’ve just given it.”

“Sessions can probably get out of ever giving the answer to a Republican Congress, but my guess is his performance earned him a ticket to a grand jury.”

* It seems that Trump actually did consider firing Mueller, but his staff talked him out of it. From the New York Times, there’s this little tidbit exploring how the disturbed mind of Donald Trump works:

The president, when asked by the pool of reporters covering a midday meeting with Republican lawmakers at the White House whether he supported Mr. Mueller, gave no answer, even though he often uses such interactions to make headlines or shoot down stories he believes to be fake.

That may have been by design, according to a person who spoke to Mr. Trump on Tuesday. The president was pleased by the ambiguity of his position on Mr. Mueller, and thinks the possibility of being fired will focus the veteran prosecutor on delivering what the president desires most: a blanket public exoneration.

* Republican Senators are walking into a mine field with the AHCA.

It’s no secret that the American Health Care Act is unpopular. In recent national polls, only about 29 percent of Americans support the bill. It is the most unpopular piece of major legislation Congress has considered in decades — even more unloved than TARP (“the bailout”), and much more unpopular than the Affordable Care Act, also known as Obamacare.

Will Republican senators vote yes on a bill this unpopular? To hang on to their jobs, senators have to keep only voters in their own states happy, not the whole nation. Perhaps red-state senators, or even some senators in swing states, might think their states are friendlier to the bill than the nation as a whole.

Our research indicates that is not the case. To get a sense of support by state, we combined recent polls to estimate support for the A.H.C.A. in every senator’s home state. Our estimates indicate that not one state favors it. 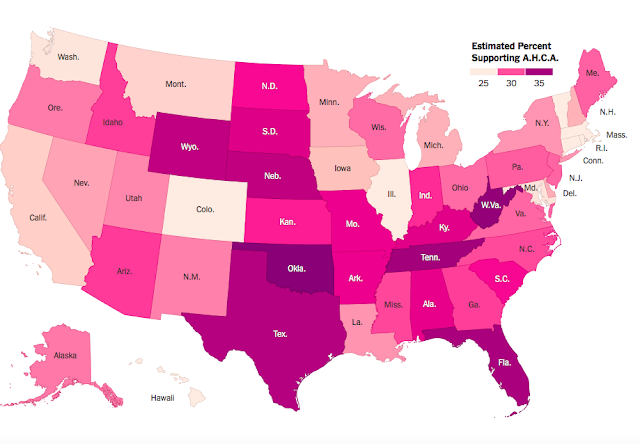 * James T. Hodgkinson, the man responsible for the shooting in Virginia today, had a history of domestic violence. That is a red flag we should all be taking much more seriously.

…one of the best predictors of future violent behavior, researchers say, is past violent behavior. And a crucial warning sign — one too often ignored — is domestic violence against intimate partners and other family members.

Not all mass shooters have a previous history of domestic violence, or of violent and erratic behavior bad enough to worry family members — but many of them do. Furthermore, most “mass shootings” aren’t how we imagine them; they’re not school shootings or other public massacres. They’re relatively private acts of horror, preceded by red flag after red flag of abusive and violent behavior.

* Finally, keep an eye out for Victory Boyd. Her first album will be released this summer.