Nancy Cook and Andrew Restuccia point out that Donald Trump is trying to master the art of the tiny. Last week the White House highlighted infrastructure and this week the emphasis is on workforce development. While an event at the Labor Department was cancelled yesterday as a result of the shooting, the big rollout was supposed to be about apprenticeship programs.

President Donald Trump next week will make expansion of apprenticeship programs the center of his labor policy, aimed at filling a record level of open jobs and drawing back Americans who have left the workforce…

The administration is committed to “supporting working families and creating a pathway for them to have robust and successful careers,” Ivanka Trump, the president’s daughter and assistant, said Friday. “There has been great focus on four-year higher education, and in reality, that is not the right path for everyone.”

I’m sure there are those who will say, “Wow, why didn’t someone think of that before?” After all, the Democrats kept pushing college education, which—as Ivanka says—isn’t for everyone. This is exactly the kind of initiative that would appeal to the so-called “forgotten man” Trump is always promising to help.

As a matter of fact, someone did think of that before. Even though a lot of people didn’t notice, supporting apprenticeship programs was a major initiative of the Obama administration over the last two years of his presidency. He even held the first ever White House Summit on American Apprenticeship.

The person who led these efforts was then-Labor Secretary Tom Perez, who is now the Chair of the Democratic National Committee. Here’s a bit about the work from an op-ed he wrote in August 2014:

When you hear the word “apprenticeship” what comes to mind? Blacksmiths and candlestick makers? Ben Franklin apprenticed as a printer before opening a print shop of his own, and we are still reaping the benefits. George Washington apprenticed as a land surveyor before his military and political career, a fitting skill for the “father of our country.”..

Today, the average starting wage for apprenticeship graduates is over $50,000 a year, and apprentices will earn an average of $300,000 more over their lifetime than their non-apprentice peers. And the benefits of apprenticeships reach all of us, and not just in better goods and services: for every taxpayer dollar invested in apprenticeship programs, we see $27 in returns…

As part of his efforts to encourage our ongoing economic recovery, President Obama has set a goal of doubling the number of apprentices over the next five years. To help make that happen, this fall we’ll be announcing a $100 million grant competition to promote apprenticeships in high-growth industries. Meanwhile, through the Registered Apprenticeship College Consortium, we’re making it easier to earn college credit for what you learn on the job, and to take those credits with you no matter where you live. The president has also called on Congress to create a $2 billion training fund to be used to reach his ambitious apprenticeship goals.

Given that the Republican Congress was not likely to appropriate $2 billion for apprenticeship programs, this effort became part of the Obama administration’s “pen and phone strategy,” in which Perez travelled the country highlighting local efforts and working with businesses to launch apprenticeship programs. As just a taste of his travels, he visited Wisconsin, Rhode Island, New York, North Carolina, Pennsylvania, Ohio, Delaware, Texas and Florida—all to promote this initiative.

If you check those links you’ll notice they were all write-ups found in small local newspapers. If you didn’t hear about this initiative back then, that is probably why. It wasn’t covered much by the major national media. But what Perez was doing is what some folks referred to as community organizing from the White House. That always works best when it starts at the ground level. 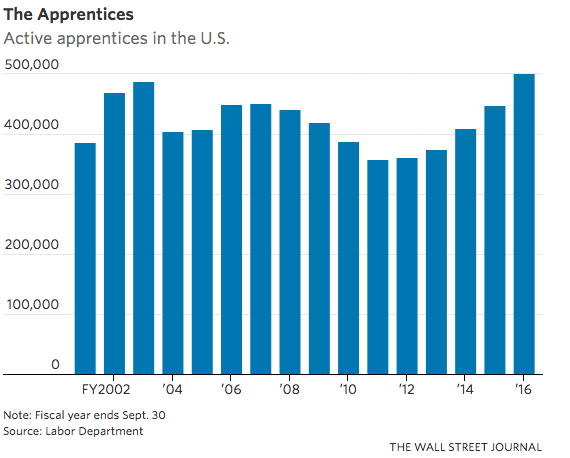 We don’t know what Trump is going to propose about apprenticeship programs because the White House hasn’t released any information yet. We know that Ivanka went on Fox and Friends to talk about it (yeah, they posted that on the White House web site) and that the president plans to give a speech or two. Forgive my cynicism, but I expect that’s all there will be to it.

Meanwhile, I’m sure that Trump’s forgotten man will continue to think that they are finally being heard by this president and that Democrats like Barack Obama and Tom Perez are simply members of the elite who ignored their plight. As this example demonstrates, that is a lie that Republicans spread and too many liberals buy into.