Opposition to the Republican health bill is growing, according to a new POLITICO/Morning Consult poll.

As the GOP-led Senate prepares to take up the measure, only 35 percent of voters surveyed approve of the bill passed by the House last month. Nearly half of voters, 49 percent, disapprove of the bill. The other 16 percent don’t know or don’t have an opinion, the poll shows.

It is always prudent to be skeptical of one poll. Who knows whether that disapproval number is 20, 30 or 35 percent? But a trend line like this coming from the same polling firm is a rock solid indicator. Whatever the disapproval number actually is, it’s going down.

* This is a perfect example of how Democrats fail. In the Georgia special election, Karen Handel ran endless ads linking Jon Ossoff to Nancy Pelosi. Kevin Drum does a good job of explaining how the propaganda works. But apparently it doesn’t just work for Republicans. Some Democrats are now going all wobble-kneed about Pelosi.

There is no challenge to Pelosi’s leadership, and none is going to happen at this point, said numerous Democrats. But it’s clear frustration is growing with the longtime Democratic leader following the extensive losses Democrats have suffered over the past half-decade.

“I think you’d have to be an idiot to think we could win the House with Pelosi at the top,” said Rep. Filemon Vela (D-Texas), who supported Pelosi in her last leadership race. “Nancy Pelosi is not the only reason that Ossoff lost. But she certainly is one of the reasons.”

Any Democrat who thinks that another leader wouldn’t get the exact same treatment from Republicans is the idiot.

* This is something we knew was going to happen.

Undocumented immigrants make up about half the workforce in U.S. agriculture, according to various estimates. But that pool of labor is shrinking, which could spell trouble for farms, feedlots, dairies, and meatpacking plants—particularly in a state such as Kansas, where unemployment in many counties is barely half the already tight national rate. “Two weeks ago, my boss told me, ‘I need more Mexicans like you,’” says a 25-year-old immigrant employed at a farm in the southwest part of the state, who spoke on condition of anonymity because he’s trying to get his paperwork in order. “I said, ‘Well, they’re kind of hard to find.’”

When you see food prices going up, blame Trump.

* This literally breaks my heart. I still believe that a majority of Americans care and would support common sense policies to keep it from happening so often.

Thousands of children are shot each year in the United States, and many of them die of their injuries, according to a comprehensive new study of gun violence published in the journal Pediatrics.

The study, conducted by statisticians at the Centers for Disease Control and Prevention and the University of Texas, found that roughly 7,100 children under the age of 18 were shot each year from 2012 to 2014. An average of 1,300 died of their injuries in a typical year.

* Here is some interesting news from the latest Pew poll. 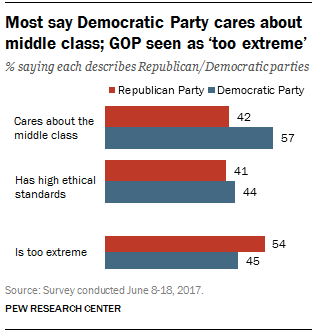 * Finally, I was just introduced to Jason Isbell yesterday. It’s a total coincidence that it happened the same day he appeared on The Late Show with Stephen Colbert. All I can say is that this song rocked my world.