In the discussion about how Democrats can improve their electoral prospects in the future, a lot has been made of the Obama-Trump voters. They are defined by the fact that they voted for Obama in 2012 and then Trump in 2016.

To be honest, I have to say that I’ve been pretty skeptical about what various people and groups have claimed about these voters. Making assumptions about them based on a comparison of precinct or county vote totals is interesting, but not terribly informative. What is important is any information we can obtain about individuals who actually voted for Obama and then Trump. I decided to review two studies that provide that for us.

The first comes from Priorities USA. They surveyed 801 Obama-Trump voters in early February 2017. Their major finding was that 42 percent of respondents said that congressional Democrats’ economic policies will favor the wealthy, vs. only 21 percent who said the same about Trump. That is a stinging indictment of the Democratic message.

What wasn’t reported as often is that an almost equal number of Obama-Trump voters (40 percent) said that congressional Republicans’ economic policies will favor the wealthy. While asking this question about Hillary Clinton’s policies wasn’t included in this survey, the overall findings are worth taking a look at.

Do you think Donald Trump’s economic policies will favor…

Do you think Congressional Republicans’ economic policies will favor…

Do you think Congressional Democrats’ economic policies will favor…

What jumps out at me is that the number of Obama-Trump supporters who think Democratic policies will help the poor is substantially higher than for Republicans or Trump. That raises questions that would be worth looking into—like whether or not this group of voters sees that as a positive or negative thing.

The second group that collected information on Obama-Trump voters is the VOTER Survey. Here is how John Sides describes their methodology.

Thus, for these 8,000 respondents, we have measures of their political attitudes in 2011 as well as self reports of their turnout and vote choice in November 2012.

From that data they were able to quantify the Obama-Trump voters included in this overall breakdown.

As you can see, 9.2 percent of those who voted for Obama in 2012 went on to vote for Trump in 2016. That is significantly larger than the 5.4 percent who voted for Romney and then Clinton.

In analyzing this large set of longitudinal data, Sides zeros in on white voters and reaches this conclusion: “Attitudes related to immigration, religion, and race were more salient to voter decision-making in 2016 than in 2012. Other attitudes do not show this pattern.” The attitudes that were not as salient to voter decision-making in 2016 included items like economic issues, trade and entitlement programs.

But that doesn’t necessarily drill down into the issues important to Obama-Trump voters. Lee Drutman, using the same data from the VOTER Survey, has done that for us. First of all, he divides voters into four groups:

You might or might not agree with the names he’s given these four groups. But for the purposes of understanding Obama-Trump voters and economic/identity issues, the breakout is useful. Here’s what the data shows: 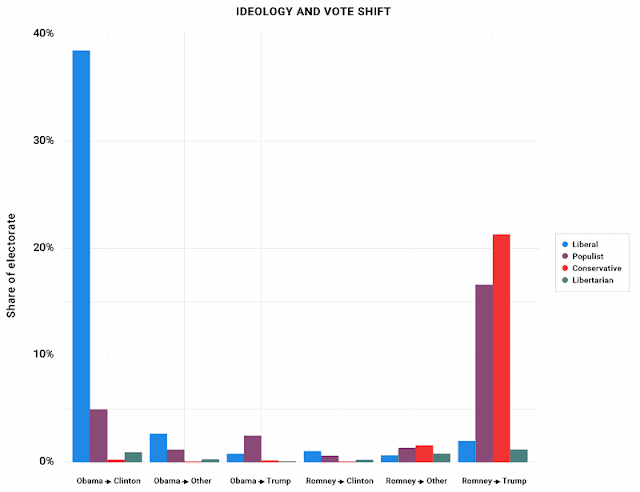 In other words, Obama-Trump voters were primarily “populists,” who are liberal on economic issues and conservative on identity issues.

Breaking that down further into specifics, Drutman provides this chart: 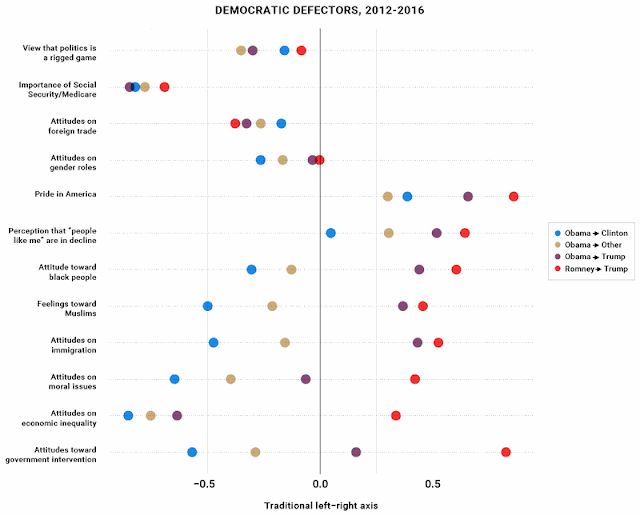 The dots you’ll want to follow for the Obama-Trump voters are purple. The division with Obama-Clinton voters (blue) is most stark in attitudes toward black people, feelings toward Muslims and attitudes on immigration – exactly the issues that Sides found most salient for voter decision-making in 2016 as opposed to 2012.

The good news overall is that Obama-Trump voters tend to agree with Democrats on economic issues. To the extent that messaging was the problem in 2016, that can be remedied. The challenge is whether or not “identity issues” will continue to be more salient. As Drutman notes:

Making economics more salient is one part of the equation. But to win back the working-class white voters, Democrats also have to find a way to make race and immigration less salient.

Yes, that’s where things get tricky. So we’ll have to save that discussion for another day.