* The Washington Post reports what Trump’s legal team is up to.

Some of President Trump’s lawyers are exploring ways to limit or undercut special counsel Robert S. Mueller III’s Russia investigation, building a case against what they allege are his conflicts of interest and discussing the president’s authority to grant pardons, according to people familiar with the effort.

Trump has asked his advisers about his power to pardon aides, family members and even himself in connection with the probe, according to one of those people. A second person said Trump’s lawyers have been discussing the president’s pardoning powers among themselves.

Those aren’t the kinds of things you do when your client is innocent.

* Martin was one of the first people to report that Natalia Veselnitskaya was more than simply a Russian lawyer. Now Reuters adds this:

The documents show that the lawyer, Natalia Veselnitskaya, successfully represented the FSB’s interests in a legal wrangle over ownership of an upscale property in northwest Moscow between 2005 and 2013.

The FSB, successor to the Soviet-era KGB service, was headed by Vladimir Putin before he became Russian president.

* As we’ve seen over the last six months, Trump tends to obsess over certain things. Philip Bump documents that one of the things he obsesses about the most is Hillary Clinton.

Clinton is Trump’s eternal foil, the person who, Trump seems to think, can always be identified as the unpopular yang to his yin, the looming reminder to his supporters of What Could Have Been. Whatever Trump does or doesn’t do, he’s always willing to point out what Clinton did or didn’t do that’s worse.

So she comes up in his interviews a lot. In fact, in 19 interviews that he’s conducted since becoming president, we found that Clinton tended to be mentioned much earlier than a number of Trump’s other favorite topics: The 2016 election, the votes he received, the electoral college and Barack Obama. Tallying the first appearance of each word in those 19 interviews, we figured out how far into an interview Trump first made mention of them, on average. (Making it 100 percent into the interview means he never mentioned it at all.) 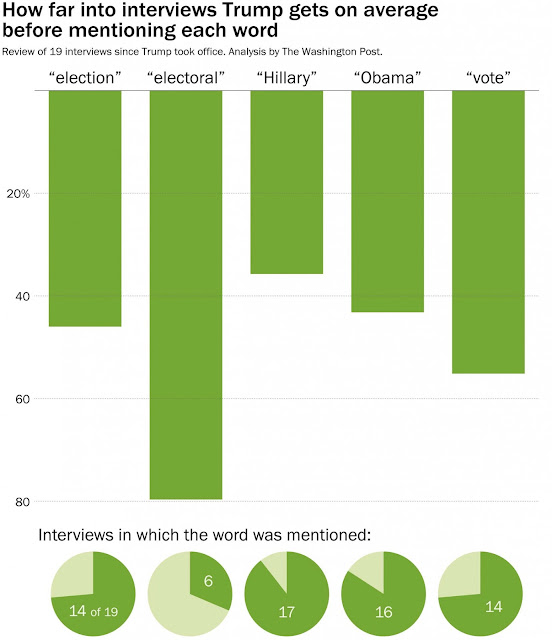 * Mike Allen reports that Trump’s staff are having to learn how to speak his language.

What doesn’t work: Sources who’ve watched McMaster in action say he over prepares to brief the President. He knows the outcome he wants and wants to stick rigidly to his plan. But Trump likes to be discursive and will frequently turn to others or meander into other subjects while McMaster is briefing him. When Trump finishes his riff, McMaster will often return precisely to the point he left off.

This bothers Trump, who has openly wished for the return of Michael Flynn, who was more spontaneous…

What works: A more successful approach with Trump is a more conversational, anecdotal style with lots of references to him — his theories and beliefs, things he has said in the past. Dina Powell, the deputy national security adviser, has been especially adroit at this: She gets the same place McMaster would go, but does it in a personal, leisurely style that engages the boss.

* Finally, I’ll be on vacation next week. We are making the annual trek up to the North Shore of Lake Superior. We know that the scenery will be spectacular and the air will be crisp. If we’re lucky, guys like this will show up to serenade us.