If you believe what Donald Trump and Paul Ryan are saying, you’d think that Obamacare is a disaster that is imploding as we speak. For example, at his town hall forum this week, Ryan said, “Obamacare is not working. We’ve got dozens of counties around America that have zero insurers left. So doing nothing really isn’t an option.”

First of all, it is important to remember that Ryan was referring to the Obamacare exchanges—where about 10 percent of Americans get their insurance. What he’s talking about doesn’t affect the other 90 percent who get their insurance via their employers or a government program. Even with that, Ryan was off by dozens because, of the more than 3,000 counties in this country, there was only one that didn’t have any insurers left in the exchanges. Now there are none.

Hannah Recht provides us with an important update. The last county with no insurers was Paulding County in Ohio. Yesterday, CareSource announced that they will sell marketplace plans there next year. Here is what the coverage map looks like right now for 2018. 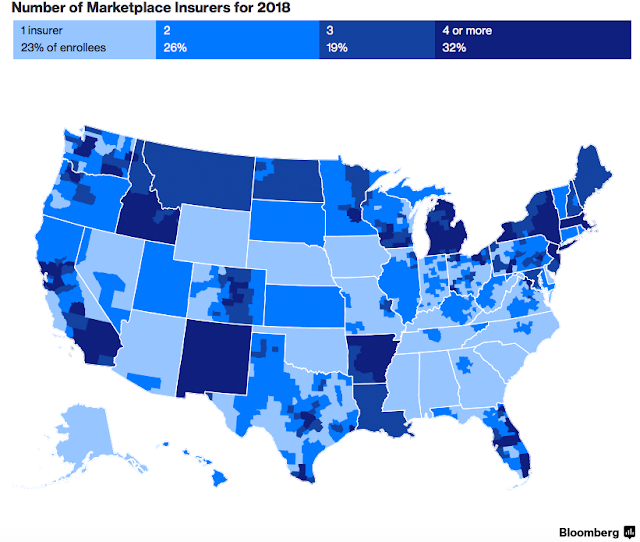 That underscores why “Medicaid for more” is the next logical step towards universal coverage. By adding it as the public option in the exchanges, it ensures that everyone would have two or more options to chose from.

When it comes to how much individuals will pay for insurance on the exchanges, we missed talking about a recent report from CBO on that matter. As you might know, under Obamacare the federal government pays subsidies to insurers (often referred to as cost-sharing) in order to hold down premiums for low income Americans. Trump has been threatening to end those subsidies and the CBO scored what would happen if he did.

If President Trump follows through on his threat to stop paying billions of dollars of subsidies critical to insurance plans under the Affordable Care Act, insurance premiums for certain plans would rise by 20 percent next year, according to a new analysis by the nonpartisan Congressional Budget Office.

But here’s the kicker: both the increases we’re already seeing in projected premiums for 2018, as well as what would happen if Trump stopped paying the subsidies, would predominantly be born by the federal government rather than those purchasing insurance on the exchanges.

…the CBO found that any premium increases will have an almost paradoxical effect: For the most part, individuals will not pay more for health insurance, but the government will. That’s because people who make up to four times the federal poverty level receive tax credits from the government that limit their monthly premiums.

Because of the way tax credits are calculated, if the premiums go up as a result of cost-sharing reductions being eliminated, the size of the tax credits for the people who are buying subsidized insurance in the marketplaces set up by the Affordable Care Act will grow. Ultimately, the government’s portion of those costs would cause the federal deficit to increase by $194 billion over the next decade.

It’s almost as if the people who wrote Obamacare knew what they were doing and built in mechanisms that would protect the participants.

The end result is that neither Trump nor congressional Republicans have been able to destroy Obamacare. But that is not for lack of trying.