* Jennifer Rubin got a copy of a letter that Project Democracy and a group of lawyers sent to Raymond N. Hulser and John Dixon Keller of the Public Integrity Section, Criminal Division of the Justice Department in which they argue that the pardon of Arpaio goes beyond constitutional limits. They explain the issue much more clearly that anything else I’ve seen.

While the Constitution’s pardon power is broad, it is not unlimited. Like all provisions of the original Constitution of 1787, it is limited by later-enacted amendments, starting with the Bill of Rights. For example, were a president to announce that he planned to pardon all white defendants convicted of a certain crime but not all black defendants, that would conflict with the Fourteenth Amendment’s Equal Protection Clause.

Similarly, issuance of a pardon that violates the Fifth Amendment’s Due Process Clause is also suspect. Under the Due Process Clause, no one in the United States (citizen or otherwise) may “be deprived of life, liberty, or property, without due process of law.” But for due process and judicial review to function, courts must be able to restrain government officials. Due process requires that, when a government official is found by a court to be violating individuals’ constitutional rights, the court can issue effective relief (such as an injunction) ordering the official to cease this unconstitutional conduct. And for an injunction to be effective, there must be a penalty for violation of the injunction—principally, contempt of court.

* Today the Trump administration took yet another step backward.

President Trump is shelving a proposal from the Obama administration requiring large employers to report salary data based on sex and race, which would have enabled the federal government to crack down on pay disparities between men and women.

The White House Office of Management and Budget notified the Equal Employment Opportunity Commission on Tuesday that it has decided to “stay” and review the proposed regulation, which was issued by President Barack Obama last September.

* This time, Ivanka didn’t even try to suggest she was against it.

First daughter Ivanka Trump, who made wage equality and workplace protections for women one of her signature issues on the campaign trail and in her personal brand, declared her support for the White House’s announcement Tuesday that it will halt a proposal requiring businesses to disclose employees’ pay, gender, race and ethnicity.

* While Trump talks about a tax plan that is going nowhere and threatens to shut the government down over funding for his wall, very few people are paying attention to the impending crisis that would happen if Congress fails to raise the debt ceiling by mid-October. I suspect that most people aren’t tuned into this one because it’s never happened before. Daniel Gross provides an example to give us some context.

…the giant conventional wisdom machine, of which I’m an integral cog, believes not raising the debt ceiling would be awful. It would be so bad it would dwarf the Lehman Brothers debacle. When the highly leveraged but poorly run investment bank was allowed to fail in September 2008, it triggered a lot of unexpected damage. The money-market fund industry nearly collapsed, as many money-market funds had Lehman Brothers commercial paper. Banks and financial institutions stopped lending to each other overnight. Trade financing froze. The stock market fell 28 percent in a few weeks.

A U.S. debt default, or the whiff of one, would be a much more significant financial event. As Yalman Onaran of Bloomberg noted, “The $12 trillion of outstanding government debt is 23 times the $517 billion Lehman owed when it filed for bankruptcy on Sept. 15, 2008.” True. But the increase in damage wouldn’t be arithmetic, it would be exponential—Lehman to the 10th power rather than Lehman times ten.

* Finally, leave it to a cartoonist like Matt Bors to tie up the last few weeks in one image. He titled this one, “Trump condemns both sides of natural disaster.” Bravo! 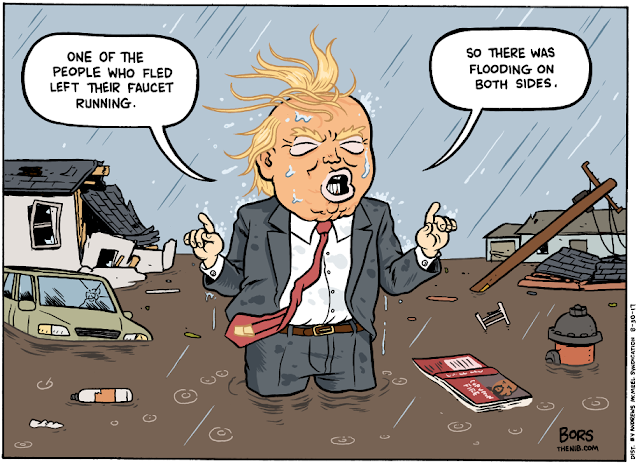