As had been broadcast prior to his speech in Missouri yesterday, Donald Trump tried to make his tax cuts sound like a populist proposal to help American workers. Part of that meant trying to sell us on the idea that cutting the corporate tax rate would grow the economy and increase wages. To make that point, he said that the corporate tax rate in this county was the highest in the developing world—limiting our competitiveness. In a way that has no meaning, what he said is true.

The reason I say that has no meaning is because that chart represents the “statutory corporate tax rate,” or the one that is on the books. It has nothing to do with what corporations actually pay in taxes. To answer that question we have to look at “effective corporate tax rates”—what they pay once all of the loopholes are factored in. Here is how the U.S. compares to the other G7 countries on that score. 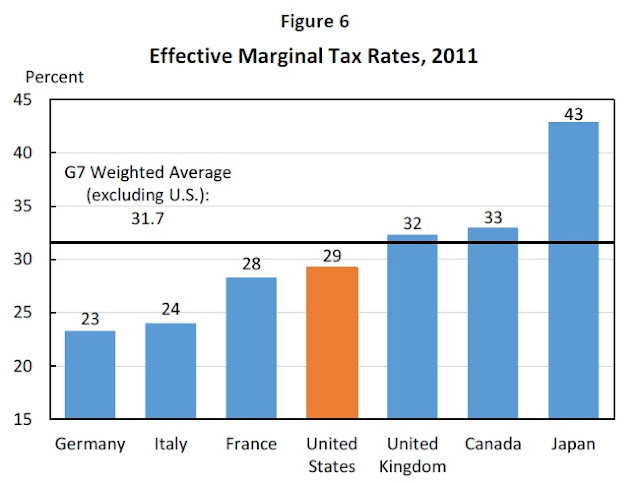 What we see is that the effective corporate tax rate in the U.S. is actually below average when compared to other G7 nations. That helps explain this chart that Kevin Drum shared yesterday to demonstrate why it is not corporate taxes that have been choking American growth.

At the end of his speech yesterday, Trump talked about the need for a bipartisan effort on tax reform. What he means is that Democrats should join his bandwagon, which is nothing more than the “trickle-down” economics that have been such a disastrous failure in the past.

On the unlikely possibility that Trump is simply ignorant of what Obama and the Democrats have discussed in the past, we might inform him that they spent a lot of energy trying to jump-start an actual bipartisan approach to corporate tax reform. As far back as 2012, Obama proposed lowering the corporate tax rate from 35 percent to 28 percent. That is precisely what the Republicans have been wanting to do for years. But the definition of bipartisan is that both sides get something they want. The other part of Obama’s proposal was to eliminate numerous deductions and loopholes that save companies tens of billions of dollars a year on their tax bills. In other words, in exchange for lowering the statutory tax rate, he wanted to eliminate the disparity between that and the effective tax rate.

In the end, Republicans wanted nothing to do with a bipartisan approach. Based on what Trump said yesterday, it’s pretty clear that he doesn’t either.